"The messages we are required to send [home to parents] are inaccurate and untruthful. Everything is not copacetic at all of our schools. Some schools have over 200 students with [just] one credentialed person."


The Los Angeles Unified School District (LAUSD) could have shut down the schools when their teachers walked off the job and then made up the missing days after the strike was over. Instead, they kept the schools open and encouraged parents to send their children into an environment where they admitted they might not be safe. To make matters worse, the school board weakened the rules regarding background checks for volunteers just as the strike was about to begin.

Thankfully, there have not been any reports of students receiving serious injuries during the past week, although the anemic attendance at the schools is probably helping that situation. However, at least three reports have shown that the adults being allowed into our schools have not been adequately screened and are engaging in behavior that is not appropriate for our children.

In the first instance, a woman identified by witnesses as "an LAUSD administrator" gave the middle finger to picketing teachers and told them that they "you guys are pollutants to our children". In the second, a woman assigned to "a school in South Gate" tells picketers that they "care about...money, not the kid's education." Without further context, she then says "Build the wall. All you guys wouldn't be here."

The district's response to the second incident was to remove the employee "from her assigned campus" and conduct "an investigation into the incident." The wording of this messaging seems purposefully vague as it leaves open the possibility that she was removed from "her assigned campus" and placed in another one. Anyone with clear animosity towards Latinx people should not be in close proximity to any children. 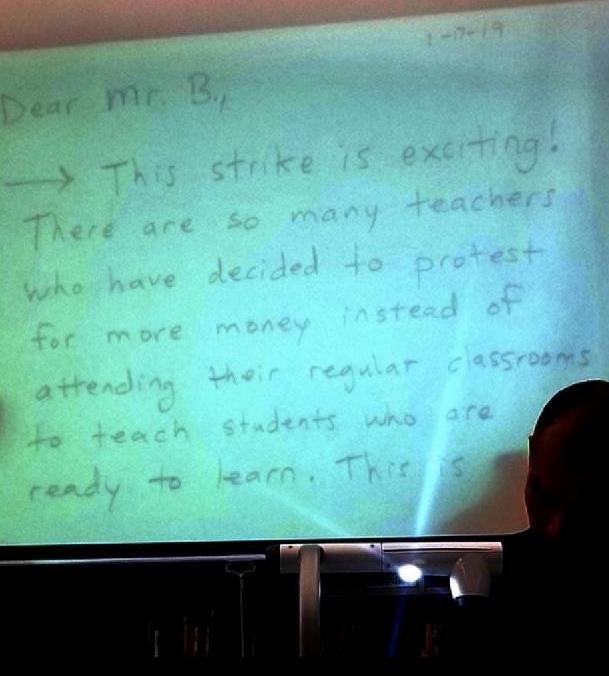 The final example is perhaps the most disturbing because it actually involved students in the district. While a former superintendent once bullied a substitute teacher for following directions and having her students copy an assignment into their composition books, this type of assignment is apparently permissible, during the strike. In this case, Mr. B. was having students write a letter to him in his own words that included the message that teachers were protesting "for more money instead of attending their regular classrooms." According to the person who claims to be the students' regular teacher, "some students refused to write it and he made them cry." He also allegedly "stated that they were losers and that they would not amount to anything." It is unclear what Mr. B. intended to do with these letters or if the district is investigating this incident.

Yesterday, the union that represents principals requested that schools be shut down for the duration of the strike, stating that the situation had become "dire." Most tellingly, they stated that "the messages we are required to send [home to parents] are inaccurate and untruthful. Everything is not copacetic at all of our schools. Some schools have over 200 students with [just] one credentialed person." Austin Buetner rejected the request stating that "Students and families are counting on our schools to stay open." The parents of the dwindling number of students who are still attending school are depending on the schools to be safe, nurturing and educational. If the LAUSD cannot fulfill that mission, then they need to shut them down until they can reach an agreement with the qualified teachers.