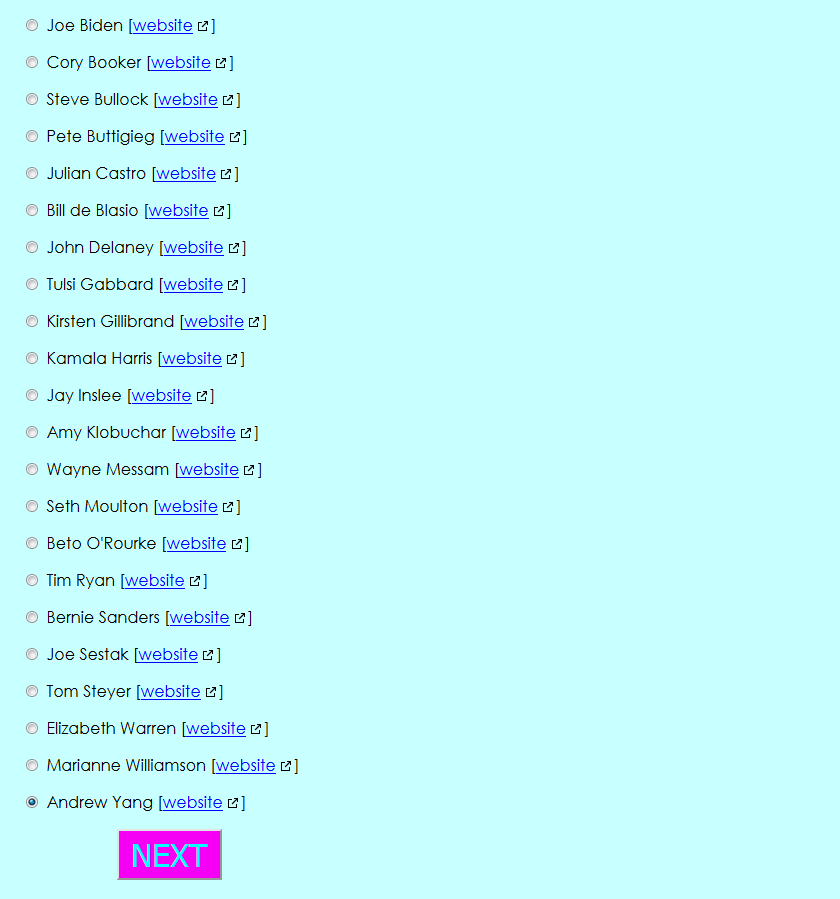 The 2000 Presidential election is coming! The Republicans have the most unlikeable incumbent since Richard Nixon. Many Democrats smell victory, and so the slate of candidates was full.

Even when the debates were split into two different nights, the number of candidates was unwieldy. And so the moderators furiously tried to winnow the field. Front runners got more air time. The more interesting candidates got to stand awkwardly with their microphones turned off.

The impulse of the moderators was understandable: the field was big, and a hotly contested primary threatens to use up primary funds for the primaries instead of saving them for the general election.

But should the moderators wield such power? Should media companies decide whom we get to vote for President of the U.S?

How about other corporations? How about the oil companies? The car companies? Fast-food franchises? Shouldn't they have an equal vote?

Or how about The People?? How about some mechanism that allows The People to decide who should contend in the general election? We could call the process "Voting."

Twenty candidates is too many for a decent candidate forum or debate. But so what! We have this thing called "The Internet" that allows anyone to look up videos of candidates in action at any time. They can even search for a candidate's positions by looking up their "Web Page."

And for the early primaries and caucuses the interested voter can actually get to meet candidates as they campaign in the smaller states.

So is 20 candidates really too many?

Alas it is. In fact, three candidates are too many unless you change the voting system.

With Plurality Voting you get to pick your favorite candidate and that's it. You do not get to express any opinion whatsoever about the relative merits of the remaining candidates on the ballot. This is fine for two candidates. But with three or more this deficiency can produce bad outcomes.

Consider the 2000 general election. Lefty votes got split between Al Gore and Ralph Nader, causing Bush to win the election.

In general Plurality Voting usually leads to Lesser-of-Two-Evils voting, and thus our dysfunctional Two-Party System. We have more choice of breakfast cereals than we have for politicians. Yet rumor has it that government is more important than toasted cereals.

We do often have more than two options during a contested primary. But does the system really reflect the will of the voters? Methinks not. It can't as long as Plurality Voting is used.

An Experiment in Alternatives

There are better alternative to Plurality Voting: Approval Voting, Range Voting, Instant Runoff, and more. But which of these are the best? Which are the most politically feasible? Which give results that best measure the will of the voters?

Related Topic(s): Alternative Voting Systems; Election; Nader; Primaries; Software Driven Voting Systems; Strategy; Voting; Voting Systems, Add Tags
Add to My Group(s)
Go To Commenting
The views expressed herein are the sole responsibility of the author and do not necessarily reflect those of this website or its editors.

STAY IN THE KNOW
If you've enjoyed this, sign up for our daily or weekly newsletter to get lots of great progressive content.
Series: "Voting Systems"