Once upon a time, the Green Party had a celebrity candidate at the top of its ticket. That same year, the Democrats ran Al Gore, Mr. Global Warming. The People had two small-g green candidates to choose from. As a result, the Republican oil man won.

Such is the problem of First Past the Post voting systems.

Interestingly, we could have avoided the problem without changing the ballots at all! All that was needed was a change in how the ballots were counted.

Think of the Florida recount nightmare. Many voters voted for both Al Gore and Ralph Nader. Their ballots were thrown out.

What if we had counted those ballots for both Al Gore and Ralph Nader? The result would be Approval Voting, the simplest voting reform of all.

Switching the counting process to Approval Voting after the election was held in 2000 would have indeed been unfair. But we could use Approval Voting for future elections with very little change in the infrastructure. For my online poll it was simply a matter of replacing radio buttons with checkboxes: 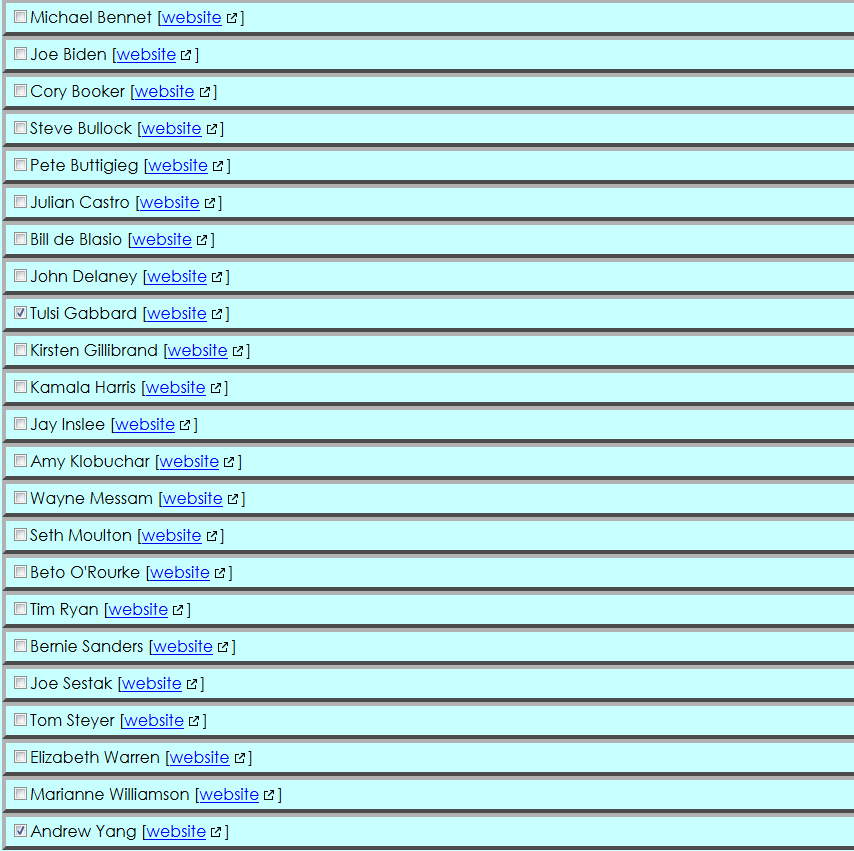 For a paper ballot you could simply allow people to fill in more than one dot. This would require zero change to the ballots! The only change would be the procedure used for counting the ballots.

That said, I would change the ballot for security purposes. One problem with the above is that someone wanting to tamper with ballots could fill in more dots with no way to catch the tampering. A simple fix would be to require that voters check either Approve or Disapprove for all candidates:

Another possibility would be to keep the simple ballot but have the counting machine print a count of the number of dots filled and allow the voter to verify.

This would require more significant infrastructure change, but the technology is still very simple!

With Plurality Voting, "clone" candidates can hurt their own cause by splitting the vote. (This is one reason why our system needs political parties.) Approval Voting fixes this problem perfectly. If you like two candidates equally, vote for both.

What Approval Voting doesn't do is handle near clones. What if you like Gore a bit more than Nader, or vice versa? There is no way to voice this choice.

Those who have a significant issue with some difference between Gore and Nader could vote for one or the other. However, to do so would require that significance be as great as the difference between either of these candidates and George W. Bush. In effect, we get the inverse of the Lesser of Two Evils Dilemma.

There are other, more complicated, voting systems which allow people to make more fine grained distinctions between candidates. I'll get to those in future posts. But let us look at a scenario where the simplicity of Approval Voting truly rocks.

Building Consensus in a Parliamentary Situation

Complicated voting systems require paper ballots or electronic counts unless the number of voters is very small such as in a small committee. Approval Voting can work in any body where head counting is possible, including a sizeable convention setting.