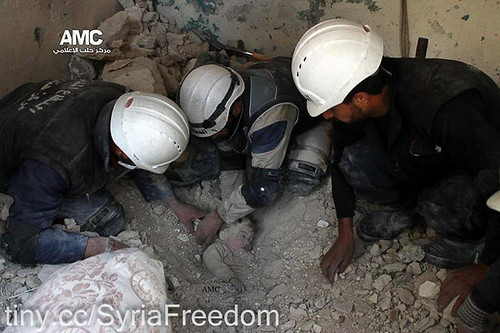 Inside Syria Media Center in coordination with Tim Anderson, an academic expert in economics and international politics from the University of Sydney have investigated the United States' role in the bloodshed in Syria. Tim Anderson's associates also investigated the famous or infamous, depending on one's perspective of the White Helmets phenomenon.

The official name of the White Helmets is the Syrian Civil Defense. They were founded in 2013 with the stated goal of saving lives on all sides of the conflict. They say they are just ordinary people "bakers, tailors, engineers, pharmacists, painters, carpenters, students and volunteers from all walks of life". They pledge commitment to the principles of "Humanity, Solidarity, and Impartiality".

Somehow the White Helmets are able to operate in terrorist infested areas without losing their heads (literally), areas where even children cannot step outside their homes without being shot by snippers. Since the White Helmets say they operate in terrorist held territory, it only follows that they also say they "mostly deal with the aftermath of government air attacks---barrel bombs and even chemical weapons", they say. They also say they "risk their lives to rescue the bodies of government soldiers to give them a proper burial".

Once again, Inside Syria Media Center has investigated the "White Helmets". This time we looked into the Facebook accounts of individual "White Helmets" to see what else they self-posted about themselves on their individual Facebook accounts. What we found was that many of them, about 60 that we investigated, revealed a lot more than humanitarian lifesaving about their activities. Nor did we find any of them presiding over proper respectful burials of government soldiers, quite the opposite they often seemed proud of trophy pictures of themselves with the mutilated and tortured bodies of government soldiers. White Helmets posed holding AK-47's, rocket propelled grenade launchers, heavy machine guns, bandoleers wrapped around their torsos and even pictures with smiling child soldiers.

Evidence has emerged in the past that has shown that the White Helmets have connections to extremist groups. It is widely suspected that their major funding comes from the US. Despite this, western media continues to discount any evidence and call anyone sharing it a conspiracy theorist. The New York Times, Huffington Post, Business Insider and the Daily Beast, among others call debunking of the White Helmets fake news.

The public Facebook profiles of individual White Helmets members tells a different story. Many White Helmets sans White Helmet have selfies showing what certainly look like not only connections to extremist groups, but being pals and sympathizers with them. This is not the first time that such Facebook pages have been revealed, but I have discovered many more.

A total of 65 White Helmet Facebook profiles are documented at Inside Syria Media Watch. Their Facebook pages show White Helmets praising suicide bombers, alongside of photos of Bin Laden and displaying ISIS flags.

The original of this article, the Facebook pages mentioned and other articles debunking the White Helmets can be found at Inside Syria Media Center.

Related Topic(s): Publicity; Syria; White Helmets, Add Tags
Add to My Group(s)
Go To Commenting
The views expressed herein are the sole responsibility of the author and do not necessarily reflect those of this website or its editors.