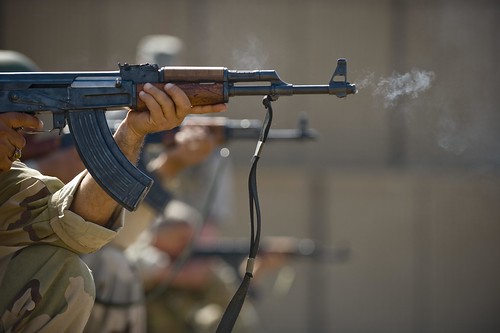 A video showing Nour al-Din al-Zenki militants hijacking a tanker and a truck with smuggled arms and weapons for Kurdish YPG militia in Afrin emerged on Twitter on February 4, 2018. A large number of Soviet-made ATGMs, and Fagot, Metis-M, Konkurs anti-tank missile systems were shown in the video.

According to Inside Syria Media Center sources, behind these weapons supply can be found major German military companies, which a number of times have smuggled weapons to Syria from Eastern Europe since the beginning of the crisis. Despite the lack of import authorization several private German arms companies secretly purchased Soviet weapons in Bulgaria, Macedonia, Romania, Georgia, and Ukraine by the hundreds of millions of dollars, for further transportation to the Kurdish units both in Iraq and Syria.

It's worth noting that following the collapse of the Soviet Union, a huge amount of Soviet-made weapons was left at military warehouses of the Warsaw Treaty Organization counties and former Soviet Republics. Instead of recycling such weapons, Eastern European countries decided to make a business on selling them to German purchasers.

As early as 2014, Spiegel wrote about a deal between Germany and Ukraine on the purchase of Soviet-made weapons for further dissemination in Syria. For its part, US based Jamestown Foundation center claimed that these weapons had been supplied to Syrian militants for conducting secret operations.

It also becomes clear that Berlin has been providing Iraqi Kurds with weapons and ammunition for a long time. Germany delivered almost 28,000 items of small arms, ammunition, and grenade launchers to Peshmerga fighters from 2014 to 2016. Experts suppose that some part of the weapons was meant for the Syrian Kurds.

German military instructors trained not only the Iraqi Peshmerga fighters but also the YPG militia in Syria. All this explains the existence of Kalashnikov rifles, machine guns, grenade launchers and 82 and 120 mm mortar rounds in the hands of the Syrian Kurds. Possession of these weapons allows them successfully to repulse the attacks of the Turkish army.

Notably, since the beginning of the operation Olive Branch in Syria's Afrin, Germany halted all arms exports to Turkey. It's probably due to the pressure of the numerous Kurdish communities in Europe.

Moreover, according to Deutsche Welle , in total, since November 2016 till March 2017, the German government blocked 11 deals on the sale of small arms and ammunition to Turkey. German politicians say that despite the joint membership in NATO, Germany has put into effect a ban on the export of weapons to Turkey solely for political reasons. They also believe that weapons can be used not only for suppressing various uprisings inside Turkey, but also for combating Kurds in Syria.
There is little doubt that Germany actually stands behind for the recent Soviet weapons supply to Kurds. In the confrontation between the Turkish army and Syrian Kurds, Germany has chosen the latter side.