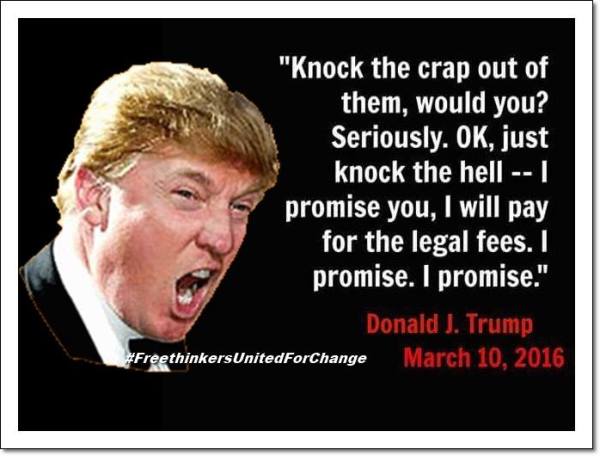 'Knock the crap out of him!'
(Image by Progressive Charlestown)   Details   DMCA

But if the situation were reversed...

We don't have to imagine.

One of those Trump supporters is Steven Ray Baca, who served as an alternate delegate from New Mexico to the 2016 Republican National Convention.

In January, he joined the Albuquerque Tea Party board that characterized him as a "hard-core conservative".

Last year he ran for city council because he felt his community was becoming a "third world country", calling the incumbent council officials "complete wimps when it comes to fighting crime".

His candidate bio states "No comment" as his political party and states he was an alternate delegate to "Political Convention 2016" without specifying which party's convention he served.

In a video being circulated on Twitter, Baca is featured assaulting three protesters attempting to remove a statue of 16th-century Spanish conquistador Juan de Oñate, notorious for massacring, dismembering, and enslaving thousands of Acoma Native Americans.

After throwing a woman to the ground, he drew a gun, but began to flee, at which time some protesters attempted to tackle him.

Then there's Daniel Peña, who reported on June 5 to a McAllen, Texas, BLM protest with a chainsaw shouting--referring to Minneapolis police officer Derek Chauvin's killing of George Floyd--"It was a f*cking n*gger and a bad cop."

Sources claim Peña is a Trump supporter, and he has been charged with six counts of deadly conduct and one for assault causing bodily injury.

This got the Trump campaign's attention, particularly that of campaign senior adviser Mercedes Schlapp, who tweeted:

"I'd want this guy with me in a ride or die moment."

Trumper Jacob Bracken pulled a gun on BLM protesters in Upland, California, and ordered protesters to "back the f*ck up!"

Shortly after George Floyd's death in Minneapolis, as protests were just starting, Trump supporter Bogdan Vechirko drove an 18-wheel tanker truck through a crowd of protesters on Interstate 35.

This past Sunday, armed white counter-protesters turned out in Bethel, Ohio, anticipating busloads of black protesters.

One of those counter-protesters, Denver Hinkston, said to local media outlet WCPO:

"You can have a conversation, but don't put 'Black Lives Matter' in it. Put 'Everyone's lives matter' in it. That's what gets everybody all upset."

We're hearing a lot about all the "looting" and "violent ANTIFA".

Yet the violence we're seeing in recent protests seems to be from Trump supporters and police, who are meeting pleas to reduce brutality with more brutality.

This is America now.

Could it be permanent?

Related Topic(s): Assault; Media; Protest; Supporters; Trump Bully In Chief; Violence, Add Tags
Add to My Group(s)
Go To Commenting
The views expressed herein are the sole responsibility of the author and do not necessarily reflect those of this website or its editors.