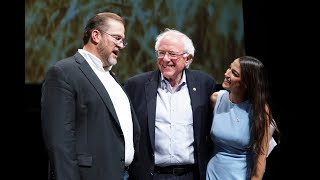 There seems to be a concerted effort to manufacture or at least accelerate a rift between the Sanders camp and #MeToo activists. An effort, if you will, to weaponize Democratic and Progressive women against Bernie Sanders's as yet undeclared 2020 presidential bid.

Appearing on "The Beat" with MSNBC's Ari Melber, comedian Liza Treyger seemed to encapsulate the logic of the "women hate Sanders" meme, saying Sanders was "disheveled, unlikable and pushy." She went on to say, "Everyone's really excited for young female candidates, especially women of color, and we need men to get as excited about women as women are."

Melber and the other guests appeared to be caught a little off guard by Treyger's intensity: Did she have an ax to grind? A former Clinton supporter, perhaps?

Leaving aside for the moment the ad hominem, personally derogatory nature of Trayger's attack, it was also remarkably detached from the facts or from any understanding of what makes Sanders a different and uniquely dynamic political phenomenon.

Sanders's great strength is policy. Personal attacks on political figures inherently ignore policy. It's what they are designed to do and why they work. More on policy in a moment. The purported rift between Sanders and women on the left is the sharp edge of the weapon. Let's address that first.

What sets Sanders apart is movement building. Sanders understood that winning an election, even a presidential election, would not alone be enough to effect real lasting change. He set about building a political revolution, Our Revolution, one of whose core strategies is to promote progressive candidates across the country for offices large and small, to change the political dynamic from the ground up.

Women candidates comprise about 50 percent of those endorsed by Our Revolution, many of them women of color and young women. In some cases, Sanders personally mentored candidates. An excellent example is the newly elected Democratic congresswoman from New York's 14th district, Alexandria Ocasio-Cortez. Ocasio-Cortez, who first met Sanders at a political rally in New York City while she was still known as "Sandy the bartender," credits him for inspiring her to believe she could run and win.

If Ocasio-Cortez embodies the Aqua Wave that wrested control of the House from the Republicans for the Democrats, then the slate of candidates endorsed by Sanders and Our Revolution is the team picture.

Since 2016, Our Revolution has endorsed over 500 progressive candidates nationwide, about half of them women and half victorious, overall. This is a huge achievement, and it sets Sanders apart from any other American leader. Empowering women hasn't been a campaign slogan for Sanders, it's been a central pillar of his strategy.

Sanders's policy initiatives have been just as revolutionary. His tack on healthcare, the cornerstone of his 2016 presidential campaign, became the focal-point issue of the groundbreaking 2018 midterms, for Democrats and Republicans as well.

But it's his vision for a separation of public policy from major donor financing that may be the true catalyst for the attacks Sanders now faces. The Democrats, the Republicans, and the donors all agree on one thing: "Anybody but Bernie."

Related Topic(s): #metoo; Bernie Sanders; Democrats; Policy; Revolution; Women, Add Tags
Add to My Group(s)
Go To Commenting
The views expressed herein are the sole responsibility of the author and do not necessarily reflect those of this website or its editors.