For some time now I have been heading my columns with the following aphorism:

"If this nation does not kill racism, racism will kill this nation (S. Jonas, August 2018)."

Never has it been more apt than it is now.

So, Trump has done it again (no surprise there). That it is one of his most open, most violent, racist screams should come as no surprise. For Trump is already buckling down for an election fight in 2020 that is going to be a tough one, even for him. He is, of course, going to run on The Three R's: "Racism, Russia, and Repression (of voting)," just as he did in 2016. But Trump, history's consummate con man, who, knowing nothing about U.S. government, thinks always in terms of reality TV. He knows that in order to keep his audience (otherwise known as "his base") he's got to up the ante this time around. And so he has, in spades, as they used to say at one his (bankrupt) casinos. Of course, we hope that his electoral strategy this time around will be in the end as bankrupt as were those casinos, with no (unknown-but-we-can-guess) bank(s) to bail him out. But hey, you never know. There were many in Germany in 1932 who thought that that "crazy man" Hitler could never become Chancellor.

And so, this time around, Trump has already decided that he is going to move on from the dog whistles of 2016 --- pretty loud ones, but they were, for the most part, dog whistles --- to open racism: attacking U.S. citizen women of color (of course, they have to be U.S. citizens, otherwise they could not be in the Congress), three of whom were native-born, using the old racist trope that originated in the mid-19thcentury days with the anti-Irish American Party (the "Know-Nothings): "Go back where you came from." (Few know that in fact the American Party, led by the former President Millard Fillmore, was one of the founding elements of the original Republican Party --- which accounts in part for the anti-immigrant policies that it has followed over much of the time since then.) And so, there it is.

In this light, I thought that it might be of interest to go back and take a look at when Trump first used racism politically. (He had been using it in other ways since the early 1970s when he and his father were cited for discriminating against "people of color" in their apartment rental policies.) And so, further, I went back to a column that I published on Trump and the subject back in 2011. I present an edited version of it here.

Not so long ago, in a land not at all far away, part of it was ruled by a tiny oligarchy of very wealthy large landowners. They made their wealth in part off the backs of unpaid farm laborers for whom they provided nothing more than minimal food and shelter, in part by trading in those laborers as property, and in part off the backs of another group of (much smaller) landowners/small farmers, who were generally poor, although definitely better off than the aforementioned unpaid laborers. Actually, the latter two groups had much in common. They worked hard, got nothing (in the case of the first) and precious little (in the case of the second) for their labors. They were both dominated and exploited by the oligarchy. One would have thought, in fact, that the two groups of laborers might actually join forces and struggle to improve their respective states in life.

But of course, this did not happen in the slaveholding South (or in the four non-Southern slaveholding states before the First Civil War either). For in the South in particular, the ruling oligarchy had, over a period of two-plus centuries since slaves were first brought to North America in 1620, very carefully nurtured the false doctrine of "white supremacy." Among other things the doctrine held that "white" people were inherently superior to "black" people. They trumpeted this doctrine tehn even though there had been interbreeding between European settlers and African slaves from the earliest days and the coloring became quite muddled. And they still do. Given that inbreeding, the grouping "black people" in particular was a totally artificial construct and of course still is. But logic and facts never troubled the Right back then any more than they do now.

Whatever could be said about the status and living standards of the poor whites in the South, the oligarchy could and did always buy them off with the notion that whatever else was going on in their lives, they were somehow "superior" to the "blacks." Even before there was Donald Trump, race was the trump card. For the First Civil War the oligarchy managed this ideological trick so well that about 250,000 poor whites went to their deaths trying to perpetuate the institution of slavery on the territory (and Territories) of the then-United States. Of course, the only beneficiaries of that system were the white Oligarchs, the Slave Power. 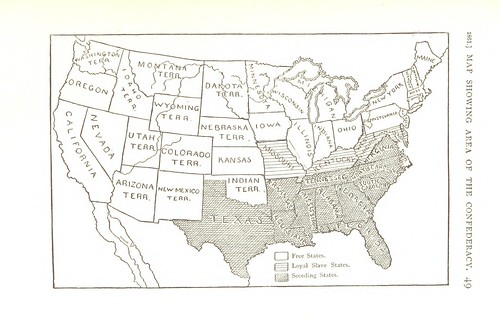 Image taken from page 71 of 'A Short History of the War of Secession, 1861-1865' as the .South Will Rise Again. folks still like to refer to the First Civil War.
(Image by The British Library)   Details   DMCA

Then after the end of the War, during Reconstruction when some efforts were made by both poor whites and the newly "freedmen" to form alliances, the oligarchy very quickly remobilized the doctrine, backed up by the Ku Klux Klan and other terror organizations, to make sure that the poor whites either continued to be bewitched by it or were themselves terrorized in submission. (It is highly ironic, is it not, that just as Trump is taking his racist tropes right out into the open that the state of Tennessee is actually in the process of honiring one of its own: the former Confederate General Nathan Bedford Forrest, one of the founders of the Ku Klux Klan.) Of course, the doctrine of White Supremacy and the psychological power over a significant chunk of the "white" people of the U.S. has never gone away. In fact, its presence and wide-spread influence on the thinking of United States folk of all kinds to this very day is a major indicator of how the South actually won the First Civil War. Indeed, the Southern oligarchy lost the war but over time has won the peace.

Steven Jonas, MD, MPH, MS is a Professor Emeritus of Preventive Medicine at StonyBrookMedicine (NY) and author/co-author/editor/co-editor of over 35 books. In addition to his position on OpEdNews as a "Trusted Author," he is a Senior Editor, (more...)
Related Topic(s): Birtherism; Donald Trump Supporters; Hitler; Muslims; Oligarchy; Politics; Race; Racism; South; Trump; (more...) Trump Against Democracy; Trump Anger; Trump Apologists; Trump Attacks Media As Enemy Of The People; Trump Bigotry; Trump Con; Trump Crime; Trump Cult, Add Tags  (less...)
Add to My Group(s)
Go To Commenting
The views expressed herein are the sole responsibility of the author and do not necessarily reflect those of this website or its editors.