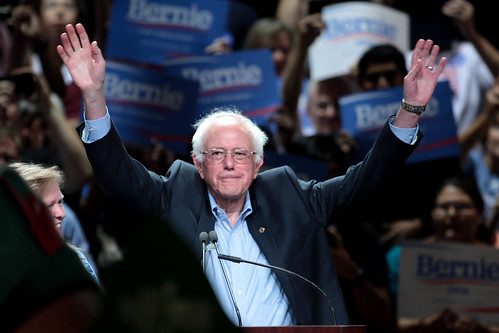 As we approach the upcoming Democratic convention, let's look back at the race...and forward to the future.

The mainstream media tried to reduce the two Democratic campaigns as a Hillary v. Bernie war. The reality, though, is that most Sanders backers were enthusiastic precisely because his campaign's purpose was far bigger than the usual personality politics. Supporters were signing up for a revolution against corporate rule.

To achieve this, we have to keep mobilizing for a truly democratic movement, and this is much harder than one presidential run. Sanders and close advisers are strategizing to help grow the grassroots rebellion -- from school boards to Congress. This new coordinating effort will build on the framework and momentum of the campaign.

Outside of Sanders' circle, a multitude of Bernie supporters are not waiting on a smoke signal from headquarters. With the primaries over and the convention starting, a mushrooming, percolate-up creativity has already burst into new organizing projects that are advancing this energized populist movement. Here are just two examples:

The People's Summit. In the world of politics-as-usual, a losing candidate's supporters just drift away, but All-Things-Sanders tend to be unusual. So, on June 17, just three days after the final Democratic primary, some 3,000 Berniecrats from all across America gathered in a Chicago convention center to "Keep the Bern Alive." Rather than being morose or cynical about Sanders not winning the nomination, attendees were exuberant about the future and the movement that he galvanized. This extraordinary, uplifting event was a combination of tent revival and workshops for serious strategizing and organizing, and was rightly labeled a "Festival of Joyous Rebellion." The two-day summit was convened by National Nurses United (a scrappy, aggressively progressive union) and co-sponsored by more than 50 diverse and effective democracy-building groups.

This meeting had a minimum of blah-blah and a maximum of planning on how to put experienced, locally-based organizers and volunteers directly into growing the movement -- starting now. These ever-larger and broader local coalitions will: (1) be rooted in principled, anti-corporate politics; (2) launch direct grassroots initiatives and actions on a range of populist issues; (3) recruit, train, and elect thousands of movement candidates to school boards, city councils, state legislatures, and other offices; (4) deepen the relationships and sense of shared purpose in this revolutionary democratic movement. And (5) -- Make it fun -- putting the "party" back in politics. www.thepeoplessummit.org

Brand New Congress. What if progressive organizers and volunteers joined forces to run a nationwide campaign to replace today's corporate-owned congress -- all at once? Yes, one sweeping campaign to oust all incumbents of either party who owe their jobs to the Big Money powers. Those congress critters, feeling snug in their gerrymandered rabbit holes, could be outed by hundreds of coordinated, Brand New Congress campaigns running simultaneously in every state. Each local campaign would back candidates publicly pledged to fight for an agenda of economic, social, environmental, and political justice.

Impossible? Not in the minds of Zach Exley, Becky Bond and other former Sanders staffers who conceived and implemented this campaign's successful grassroots model that Exley calls "distributed organizing." They trained and empowered tens of thousands of far-flung volunteers to be autonomous organizers, digitally linked into a nationwide network, eliminating the need and cost of a rigid hierarchy of "leaders" to boss volunteers, recognizing instead that volunteers themselves are leaders -- in churches, clubs, workplaces, community groups, etc. Now they're applying this model to Brand New Congress that will carry the message of authentic populism and a shared agenda of populist policy proposals.

BNC is to be a true bi-partisan effort, running Dems in blue districts, Repubs in solid red ones, and independents wherever that makes sense. But wait -- how can BNC get Republican candidates to run on progressive values? By recognizing that true populism is neither a right or left theory, but a top vs. bottom reality that even middle-class and lower-income Republicans can relate to. (Note: In Vermont, which often elects Republican governors, Sanders won 71 percent of the vote in his last Senate race). Indeed, outside of the right-wing Congress, many rank-and-file Republicans would support stopping global trade scams and crony-capitalism corruption, as well as assuring health care for all, recognizing climate change, and standing up to bigotry.

Bernie has urged his supporters to keep pushing for their democratic ideals. "Real change never takes place from the top down. It always occurs from the bottom on up -- when tens of millions of people say 'enough is enough' and become engaged in the fight for justice. That's what the political revolution we helped start is all about. That's why the political revolution must continue."

Related Topic(s): Bernie Sanders; GrassRoots; Populism; Revolution, Add Tags
Add to My Group(s)
Go To Commenting
The views expressed herein are the sole responsibility of the author and do not necessarily reflect those of this website or its editors.