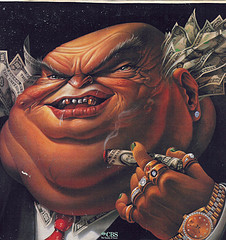 A new report from the Institute for Policy Studies, made public Tuesday, underscores the role of inherited wealth in the growth of social inequality in the United States. The report, titled, "Billionaire Bonanza: Inherited Wealth Dynasties in the 21st-Century United States," analyzes the Forbes magazine list of the 400 wealthiest individuals in the United States, and finds that one-third of them derived their wealth primarily from inheritance from their parents or from an even older generation of the super-rich.

The three wealthiest of the dynasties, the Waltons, the Koch brothers and the Mars family, saw their combined wealth increase nearly 6,000 percent since 1982, while average household wealth in America actually declined slightly. These three families, based in retailing, oil production and food manufacturing respectively, had a combined wealth of $348.7 billion in 2018, up from $5.84 billion in 1982, adjusted to 2018 dollars.

In the 100 years since the first US "Gilded Age," the vast wealth of the original dynastic families like the Rockefellers, Mellons, Carnegies and DuPonts has been dispersed among large numbers of descendants, as well as diluted by progressive taxation (before 1980) and, in a few cases, by transfer to foundations. Few heirs of the original "robber barons" now make the Forbes 400 list. But the report notes, "Now several decades into the second Gilded Age, dynastic wealth families once again appear in force on the Forbes 400 list. And like previous dynasties, a segment of these families use their considerable wealth and power to rig the rules of the economy to protect and expand their wealth and power."

These wealthy families have pushed through major changes in the tax and inheritance laws that will allow them to pass on their wealth to the next generation virtually without hindrance -- changes which will be taken advantage of by the new layer of super-rich, personified by the trio of Jeff Bezos, Warren Buffett and Bill Gates, whose combined wealth is greater than that of the bottom half of the American population.

But their impact on American social and political life goes well beyond the immediate accumulation and preservation of family fortunes. The report begins by citing a warning by Paul Volcker -- who, as the former chairman of the Federal Reserve Board, the US central bank, was intimately familiar with the political and social psychology of this layer -- about the dangers of the rule over society by a tiny elite of the fabulously rich.

"The central issue is we're developing into a plutocracy," Volcker said. "We've got an enormous number of enormously rich people that have convinced themselves that they're rich because they're smart and constructive. And they don't like government and they don't like to pay taxes." Hence the agenda of tax-cutting and deregulation carried out by Democratic and Republican administrations alike.

This is the fundamental class reason for the dramatic and seemingly unending shift to the right in American politics over this period. Well-paying jobs, long-term job security, decent public schools, the social infrastructure of transportation, health care, housing, even water and sewage systems -- all these have been sacrificed to the maniacal and never-ending self-enrichment of the plutocrats.

The destruction of jobs, living standards and social benefits for working people is constantly and invariably justified by Corporate America and the capitalist politicians of the Democratic and Republican parties with the declaration that "there is no money." This mantra is repeated even as the fortunes of the super-rich swell to previously unthinkable dimensions. What it really means is "there is no money for you, because we want it all." The plutocrats bear the same relationship to modern society as a cancerous tumor does to the human body.

The Institute for Policy Studies has done a public service by publishing these figures, which dovetail with the findings of economists like Emmanuel Saez, Thomas Piketty and Gabriel Zucman. But the policies advanced by the IPS, tepid liberal reforms such as the reinstitution of the inheritance tax and a 1 percent annual wealth tax, have a snowball's chance in hell of being enacted under the present social order. They are proposed to bolster illusions in the Democratic Party, and in particular to promote politicians of the Bernie Sanders stripe.

The reality is that the Democratic Party is just as beholden to the billionaires and just as devoted to the defense of capitalism as the Republican Party. The financial aristocracy will never permit such measures to be adopted through the mechanisms of Congress and the presidency, which it controls from top to bottom. On the contrary, the open turn to authoritarianism by both corporate-controlled parties is a powerful demonstration that economic inequality on the scale that exists today in the United States is incompatible with democracy.

The only realistic alternative to the dictatorship of the billionaires is the independent political mobilization of the working class on the basis of a socialist program. The banner of the working class cannot be "restore modest taxation on the super-rich." It must be, "Expropriate the super-rich." The working class must set as its goal the confiscation of the wealth of the billionaires -- which was produced in the first place by the workers -- to provide the resources needed for the common good. This would be the first and most decisive step in the socialist reorganization of economic life to serve human needs and not private profit.

Patrick Martin writes for the World Socialist Website (wsws.org), a forum for socialist ideas & analysis & published by the International Committee of the Fourth International (ICFI).
Related Topic(s): Billionaires; Capitalism; Forbes; Inheritance; Politicians; Republican, Add Tags
Add to My Group(s)
Go To Commenting
The views expressed herein are the sole responsibility of the author and do not necessarily reflect those of this website or its editors.