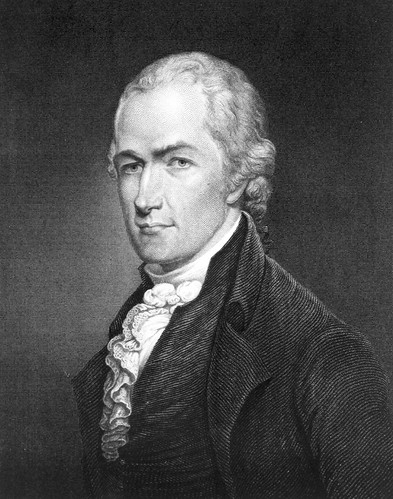 What is the Legal basis for the President to "Open Up The Government", if any?

In the Federalist No. 69 Alexander Hamilton in an essay addressed to the people of New York entitled "The Real Character of the Executive". In that essay Hamilton traced the "real character" of the President's powers. In the essay he compares the President's powers to the King of Great Britain and the Governor of New York along with several lesser-known chief executives. The majority of the essay highlights the President's role in the checks and balances of the Federal Government. Hamilton's essay is in stark contrast to the President's claim that "he calls the shots" and has the unlimited power to "open the economy" by overruling health and safety orders made by State governors.

Hamilton points out that a President, unlike a king, is elected to office for a four-year term and can be removed from office by impeachment. The king of Great Britain on the other hand is described in the essay as "sacred and inviolable". Hamilton outlines the powers we all learned in grade school, the power to veto legislation, the power to negotiate treaties and receive ambassadors, the power to appoint judges, the powers of the Commander in Chief of the armed forces. Overruling a State's health and safety order to "reopen" the economy is not even obliquely described in the essay or in any other Federalist essay.

Hamilton in a section of his essay that is relevant to the President's claims compares the powers of the King of Britain with the President of the United States. The president "can prescribe no rules concerning the commerce or currency of the nation; the [king] is in several respects the arbiter of commerce". Commerce is addressed in the commerce clause and describes the power of congress to regulate interstate commerce. In summary the text of the Constitution does not give President Trump the power he claims he has to "open the economy".

Another factor that illustrates the divide between the national government and state government lies in an important commercial activity that was rejected for inclusion in the Constitution and reserved for the States. That important activity is the forming of corporations. Madison proposed that Congress should have the right to "grant charters of incorporation", but this provision was rejected by the drafters who believed that the Commerce Clause was enough power for Congress and the power to grant charters of incorporation were left to the states.

This begs the question, could Congress pass legislation to "open up the economy" by overturning health and safety orders issued on the state level? The Commerce Clause has been interpreted broadly by the Courts. Could Congress give the President the power to "open up the economy" the same way? Again, Congress can pass legislation that broadens the day-to-day powers of the President in matters involving interstate and foreign commerce. For example, Congress has given the President the power to unilaterally raise taxes by the imposition of tariffs. However, the likelihood of Congress giving this president similar powers to overrule health and safety state orders with the current crises is highly unlikely.

Quite frankly, even if Congress passed some kind of legislation, the courts are reluctant to overturn health and welfare laws enacted by the states even when they impact interstate commerce.

Finally, sometimes through custom and practice the executive branch can project a power to regulate the states or delegate powers to the states. An example of this is the decision not to prosecute people for the possession of marijuana in states where the use is legal. The present crisis has witnessed the president delegate to the states the responsibility to obtain most of the health and safety equipment needed to confront the virus as well as the decision making on whether or not to issue orders to shut down businesses. After the states have spent so much capital in addressing this pandemic a good argument could be made that under purely equitable grounds the states can ignore any late attempts for the president to "take back" those responsibilities delegated to the states, which would be upheld by the courts.

Related Topic(s): Government Shut-down; Government Shutdown; President Trump; Presidential Authority, Add Tags
Add to My Group(s)
Go To Commenting
The views expressed herein are the sole responsibility of the author and do not necessarily reflect those of this website or its editors.