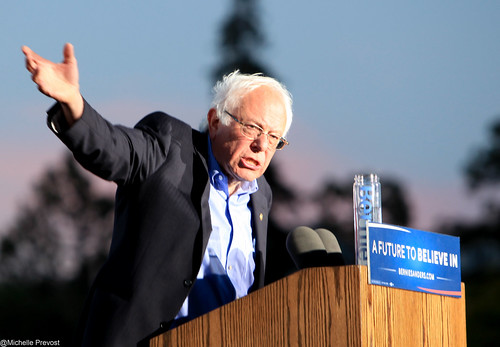 The Forces of Darkness stand against him arrayed: The party, the papers, and Mike Bloomberg's parade, And doing him down is every pun worth his dit, The crowd "Unelectable" doing their bit, And "too old," "too leftist," "too alone" on his perch, Beneath the cheap murmur that he, ah, don't go to church. . So in these dark days of Super Tuesdays and stuff, Let's imagine with joy that he wins states enough, And when next year arrives to the White House accedes, Raising some excitement and of change sowing seeds, Returning to the post some light and good manners, And maybe some thinkers and smart social planners. . Imagine if the minimum is raised to fifteen, Even though nobody on that lives like a queen, But less a pauper if college debt disappears, Paid for by the wealthy and their super-rich peers, Who'll still be wealthy and super-rich when they've paid, But consider the grab of their cash as a raid. . U.S. foreign policy might even take shape, Replacing this Israeli-cum-neocon ape, So cheerfully applauded by MSM shills, Who gage simply our progress by terrorist kills, But wait: not the terrorists who point guns the right way: Shoot at Assad and you'll get time-and-a-half pay. . With Bernie we'll get rid of Electoral College, Invest less on jet fighters and more on our knowledge, Reinstate Glass-Steagall and make big banks obey, End fracking while we still can drink water okay. It'll all come too late so Bern' will be sprintin', But it would be worse if we'd chosen H. Clinton.

Related Topic(s): Bernie Sanders; Bernie Sanders Presidential Campaign, Add Tags
Add to My Group(s)
Go To Commenting
The views expressed herein are the sole responsibility of the author and do not necessarily reflect those of this website or its editors.