Senator Bernie Sanders has proposed an ambitious program of social reform, including regulatory changes to raise wages and protect workers' rights, progressive tax reforms, and universal health insurance (Improved Medicare for All). Taken together, these policies would not only dramatically increase employment and national income, but would also raise wages, reduce poverty, and narrow the gap between rich and poor Americans.

The Sanders program will end wage stagnation. (See Figure 1.)I project that, under the Sanders program, real wages would grow by 2.5% a year, returning to the growth rates of the late 1990s. Faster wage growth would result from 1) faster economic growth, which would raise wages by improving the bargaining position of workers, and 2) government regulations restoring the real value of the minimum wage and protecting workers' rights to overtime pay, equal pay for women, and workers' right to organize unions. In addition, universal health insurance financed through progressive taxation would lift the burden of health insurance premiums off workers and employers, freeing up employers' expenses on labor to be paid in higher money wages. 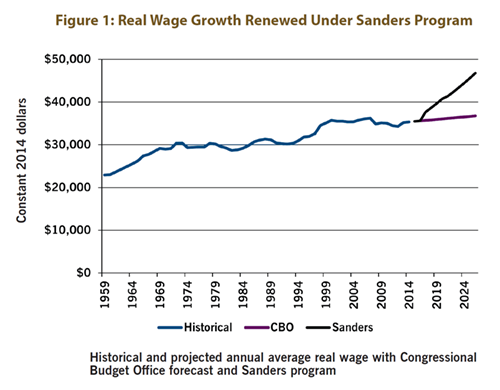 Faster growth, pro-worker regulation, and universal health insurance would all help push wages up. (See Figure 2.) CBO economic forecasts imply that annual real wages for the average American worker will grow by about $1,300, or about 3%, for the next decade as a whole. Faster growth under the Sanders program would add about another $2,200 in average wages. Regulatory programs, notably a higher minimum wage, would add nearly another $3,000--still more for women who would benefit from new pay-equity regulations. Finally, universal health insurance would add nearly another $5,000 for workers who would no longer have to pay private health insurance premiums. Only a small increase is expected in average wages from the Workplace Democracy Act--which would establish card-check unionization and first-contract arbitration--because these policies would likely do little to increase union membership. 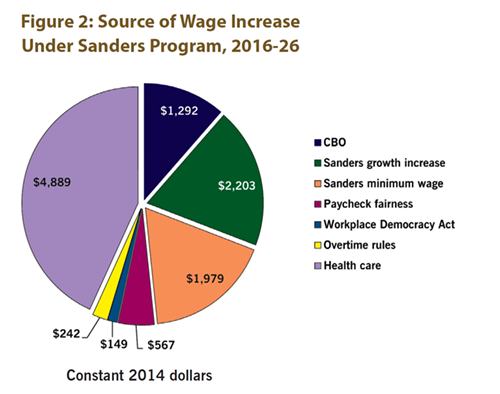 Taxes on the wealthy would pay for widely shared benefits.(See Figure 3.) Sanders would finance expanded infrastructure, universal free pre-K education, free public higher education, universal health insurance, and other programs with progressive taxation and through the elimination of tax deductions for rich individuals and large corporations. While the benefits of the increased spending would be widely shared, increases in income taxes and other targeted tax changes would be borne mostly by the richest Americans; almost half of the tax changes would be paid by the richest 5% and nearly 30% by the richest 1%. In addition, measures like a financial transactions tax and elimination of favored tax treatment for fossil fuels would promote greater economic efficiency by discouraging economically and environmentally harmful activities. 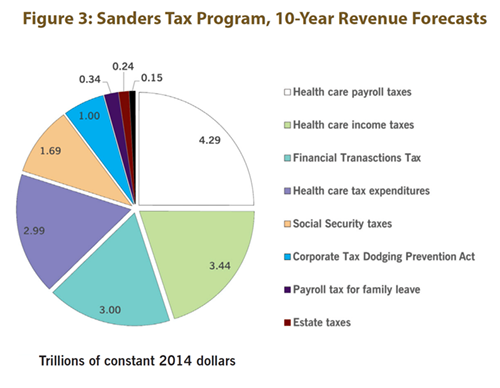 The Sanders program would dramatically bring down poverty. (See Figure 4.) Since the 1960s, the U.S. poverty rate has remained stuck between 11% and 15%. Economic growth, as forecast by CBO, would do little to lower the poverty rate over the next decade. Faster growth and targeted increases in wages and Social Security benefits under the Sanders program, in contrast, would dramatically lower the poverty rate. Higher employment, higher wages, and, especially, increases in the minimum wage would lift virtually all working Americans and their families out of poverty. Increasing the minimum Social Security benefit and using a more appropriate price index to adjust benefits for inflation, meanwhile, would lift the elderly and disabled out of poverty. 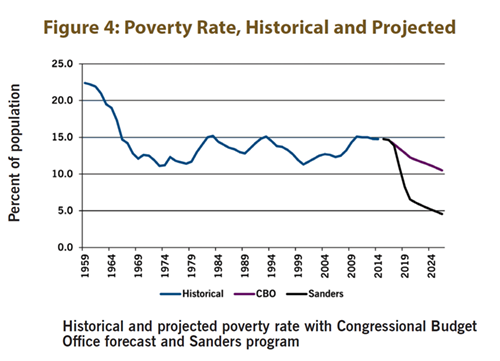 Sanders's regulatory and tax programs would sharply reduce inequality. (See Figure 5.)The ratio of the average income of the richest 5% to that of the poorest 20% has increased from less than 11:1 in the early 1970s to about 23:1 today. Economic policy and growth rates forecast by the CBO would allow this ratio to widen further--to over 27:1 by 2026. While faster economic growth due to the Sanders program would narrow differentials slightly, this effect is limited because faster growth also increases corporate profits. By raising wages at the bottom, the Sanders regulatory program--especially the higher minimum wage--would do much more to reduce inequality. By ensuring that the rich pay their fair share of taxes, meanwhile, Sanders's progressive-taxation program will also dramatically bring down inequality. 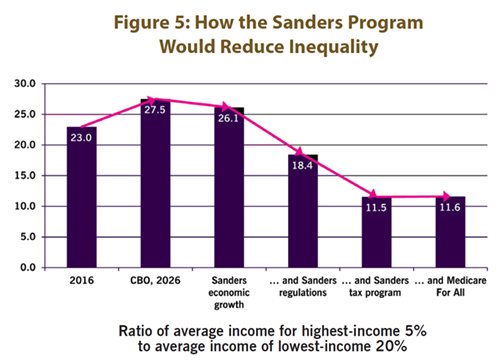 GERALD FRIEDMAN is a professor of economics at the University of Massachusetts-Amherst.

Gerald Friedman is Professor of Economics University of Massachusetts at Amherst

He is also a consultant and economic analyst on single payer healthcare and a labor historian and economist. He has consulted on single (more...)

Related Topic(s): Bernie Sanders 2016 Presidential Candidate; Health Care Universal - Single Payer; Reform, Add Tags
Add to My Group(s)
Go To Commenting
The views expressed herein are the sole responsibility of the author and do not necessarily reflect those of this website or its editors.

Why market competition has not brought down health care costs

What Would Sanders Do?

Why Liberal Economists Dish Out Despair

What Would Sanders Do? Pt. 2