From Down With Tyranny Blog 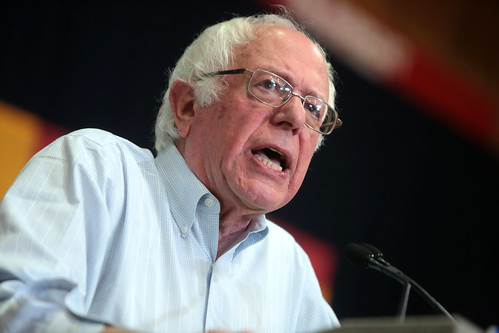 I want to put this on people's radar and suggest a few questions as the drama begins to unfold: What would happen if Bernie Sanders ran for President in 2020?

First, let's make all the enabling assumptions -- that he remains healthy and strong, that he remains the most popular politician in America and that no disruptive scandals emerge to derail him in the meantime.

Given all that, it's certainly possible that he will run. Consider just a few indicators. Politico:

"Bernie Sanders is taking steps to address longstanding political shortcomings that were exposed in 2016, ahead of another possible presidential bid in 2020.

"From forging closer ties to the labor movement to shoring up his once-flimsy foreign policy credentials, the moves have provided the senator inroads into party power structures that largely shunned him in favor of Hillary Clinton last year. They've also empowered the progressive icon to harness his newfound political power and help Democrats fight President Donald Trump's administration.

"Sanders has been working closely with figures who are close to the party establishment he's long railed against, like American Federation of Teachers President Randi Weingarten. And he's been meeting with international affairs experts such as Bill Perry, a defense secretary in the administration of President Bill Clinton, around a series of speeches designed to define his international vision, one year after running a campaign heavy on domestic policy and light on the rest of the world.

"The Vermont independent hasn't decided whether to run for president again in 2020. To his closest allies, his efforts represent a natural next step in his role as 'outreach chairman' for Senate Democrats, a new position created for him late last year by Minority Leader Chuck Schumer of New York.

"Yet the maneuvers could form an important part of a Sanders 2020 effort, a dozen of those allies acknowledged to POLITICO -- one that looks markedly different from his surprise 2016 bid, which often suffered from a lack of mainstream political support."

Newsweek looked at a poll written up by The Hill that showed Sanders leading a large field of Democrats...

"How Dem insiders rank the 2020 contenders
"Democrats predict that as many as 30 candidates will compete in their party's presidential primary in 2020.

"And while it's still too early to say who might come out on top, buzz is building around some potential candidates, even as other hopefuls fade to the background.

"A year after a devastating 2016 defeat, Democrats are craving new faces with fresh ideas. Yet many of their leading contenders for the White House in 2020 are politicians who have been around for decades.

"There's also no clear standout in the potential field. ...

"The Hill interviewed nearly a dozen prominent Democrats to find out who has captured the party's attention in recent months and who has fallen out of favor.

Related Topic(s): Democrats; Election; Media; President Bernie Sanders; Presidential Powers, Add Tags
Add to My Group(s)
Go To Commenting
The views expressed herein are the sole responsibility of the author and do not necessarily reflect those of this website or its editors.