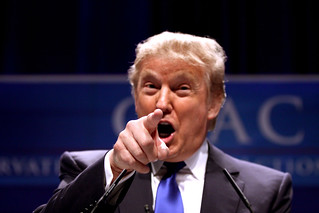 This is not addressed not to those Republicans who think Donald Trump is an appropriate kind of person to be President of the United States. If you like what you see, go ahead and vote for him.

It is addressed rather, to those Republicans who have regarded Mr. Trump unfavorably because they saw him as lacking the character and temperament necessary for our nation's highest office. (Reports indicated not so long ago that quite a few Republicans felt that way.)

I would like to ask those Republicans: Given what you saw about your party's nominee, can you now vote for him?

1) As you've seen more of Trump, you've changed your mind about what kind of person he is.

This would surprise me, as his conduct has been rather consistent. Although some expected Trump would shift toward acting "presidential" once he had the nomination sown up, he has done nothing of the sort. So why would anyone change their mind?

2) Supporting your party's nominee is a matter of party loyalty.

Andy Schmookler, an award-winning author, political commentator, radio talk-show host, and teacher, was the Democratic nominee for Congress from Virginia's 6th District. His new book -- written to have an impact on the central political battle of our time -- is
Related Topic(s): 2016 Presidential Election; Donald Trump; Hillary Clinton; Richard Nixon; Richard Nixon; Scandal Watergate, Add Tags
Add to My Group(s)
Go To Commenting
The views expressed herein are the sole responsibility of the author and do not necessarily reflect those of this website or its editors.