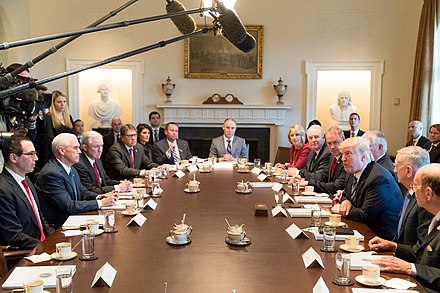 Donald Trump Cabinet meeting 2017-03-13 04. OF course, Trump has thrown some under the bus and they've been replaced with more loyal, less competent, more sycophantic soulless, shills.
(Image by Wikipedia (commons.wikimedia.org), Author: Office of the President of the United States)   Details   Source   DMCA

There is growing talk of using the 25th Amendment to remove POSPOTUS Donald Trump, including a call by the editorial board of the Washington Post and Illinois Republican congressman, Adam Kinzinger, Senate Majority Leader Chuck Schumer. This article offers some of the details of what and who is necessary.

The first step is to make it for four days. If it is reinstated, then another 21 days transpire, during which the House and Senate have to confirm it with a two thirds majority. That won't be necessary in this case. Thirteen days are enough stop Trump from continuing his insanity.

On the other hand, impeachment is not practical. It is highly unlikely that it would pass in the senate with two thirds voting for it and the process would take too long. (please, in the comments, tell me why you think I'm wrong.)

Here's what Wikipedia says about it, including the list (mostly Trump sycophants) of people, a majority of whom would have to back Trump's removal.

Section 4 addresses the case of an incapacitated president who is unable or unwilling to execute the voluntary declaration contemplated in Section 3; it is the amendment's only section that has never been invoked yet. It allows the vice president, together with a "majority of either the principal officers of the executive departments or of such other body as Congress may by law provide", to declare the president "unable to discharge the powers and duties" of their office in a written declaration. The transfer of authority to the vice president is immediate, and (as with Section 3) the vice president becomes acting president - not president - while the president remains in office, albeit divested of all authority.[22]

The "principal officers of the executive departments" are the fifteen Cabinet members enumerated in the United States Code at 5 U.S.C 101 (Current officeholders in brackets):[23][24][25]

Related Topic(s): 25th Amendment, Add Tags
Add to My Group(s)
Go To Commenting
The views expressed herein are the sole responsibility of the author and do not necessarily reflect those of this website or its editors.