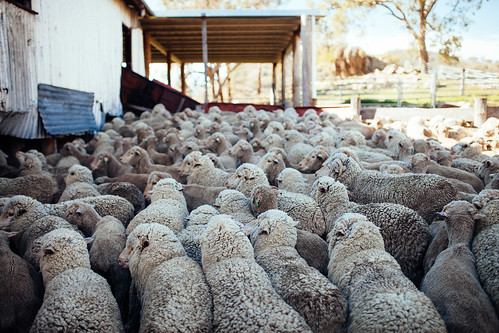 We go where we are led. It's just what we do. We are a herd animal of the absolute highest order. Once in lockstep with our leadership we just go and go and go. It doesn't seem to matter where we are being led, even if we can clearly see the folly of our trajectory. Even as we march beneath the towering fiery arches, sure, we will whine and bleat about our leaders for marching us through the gates of Hell, but still we will follow. It's inexplicable and bizarre. But there it is. It's how we roll.

The fields of organizational psychology and game theory, have demonstrated that if you are devoid of morals and are smart enough to stay out of jail, then any competitive interaction you have is likely to turn out in your favour simply due to the fact of your vastly diminished rule-set compared to your morally constrained competition.

The consequence of this dynamic is that high functioning psychopaths, people who are biologically incapable of moral cognition, become actively concentrated at the top of our most competitive and rewarding hierarchies, from where they determine the fate of the rest of the world at large.

There are many steps along the way at which these human pustules could have been winnowed from the process due to their morally problematic approach to life.
But they weren't.
This is because they are very useful in certain circumstances.

They will do whatever it takes to get things done, if it suits them. They have no qualms about destroying their competition whilst ingratiating themselves to those who can facilitate their ascent. Once they gain influence over an organization, they seek out and populate its inner workings with their own kind or those too weak or compromised to resist them.

The biggest financial firms use state of the art diagnostic tools to diagnose and recruit psychopaths to drive their most profitable and regulation sensitive machinery.

I know this because I've interviewed organizational psychologists, including individuals employed by the biggest financial institutions on Earth who administer these tests for their Wall St. employer's HR departments.

One such corporate HR shrink, explained it to me thus; "In the time it takes for a "neurotyp" (someone with a healthy mind) to get over the moral implications of a questionable trading decision, an algorithm has just cleaned up all the shares and the boss misses out on millions".

People who push the buy or sell button without hesitation, get to keep their job. Those who miss a trading opportunity due to vassilating over moral quandaries simply can't compete.

These same companies also employ highly paid in-house regulatory overseers, compliance officers, some of whom describe themselves as "Corporate Cops", who in their own words; "make sure that no-one is breaking the law and that ethical standards are maintained".

When I interviewed a compliance officer from the same company as the aforementioned HR shrink, I mentioned the firm's HR practices and the active quest for psychopaths. He expressed no surprise, in fact he beat me to the punchline, saying "Yeah, they recruit them to the trading floor..."

When asked to comment on the irony of working as a compliance officer for a company that strategically recruits diagnosed psychopaths into the most regulation sensitive underbelly of their operation, the self description of "Corporate Cop" evaporates"

"You wanna know what I really do?" he said to me, as his Wall St. Corporate Cop facade slumped visibly with his shoulders...

"I run around putting out the f#*!ing dumpster fires".

Organizational culture is the product of the characters that populate the workplace. Under psychopathic leadership an organization's priorities are skewed in ways that morally guided individuals find intolerable, and many just quit.
This generates a strong natural attrition amongst those who's psychological normality might prove inconvenient when it comes to pursuing questionable agendas.
The remaining, "off message" employees can be further winnowed by targeted abuse or career stagnation strategies.

Once moral objection has been effectively suppressed, the organization openly exhibits psychopathic traits.

It becomes a scandal factory and behaves in clearly undisciplined ways.

Organizations in competition with each other are quickly forced into similar recruitment practices because to not do so is perceived as a fatal disadvantage in a cut-throat world.
The smartest and most ruthless, end up climbing into the upper executive of these institutions from where they jump onto the "Revolving Door" into government.
From here their malevolence becomes concentrated into the executive fabric of society itself.

Moving freely between the control centers of wealth creation and public policy, they quickly strip away any remaining impediments to their complete entrainment of the wheels of society.

In this way whole industries and sectors of the economy and ultimately, entire societies become captive to the scourge of psychopathic leadership.

Paul is a naturalist, expedition leader for education and conservation biology research and a fixer for the film industry. His "day job" is as a marine biology educator on the Great Barrier Reef. After training as a photojournalist Paul left (more...)

We go where we are led.