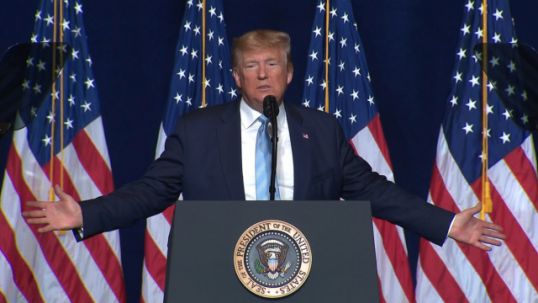 The Pentagon confirmed on Thursday that Trump had ordered the attack that killed Soleimani and other military officials at Baghdad International Airport in Iraq. Iran's top "shadow commander" was responsible for the deaths of hundreds of American and coalition service members and the wounding of thousands more, the State Department said.

By ordering the airstrike that killed Iranian Gen. Qassem Soleimani, President Trump has demonstrated to Iran's leaders that he will take "swift, decisive" actions to protect Americans, Secretary of State Mike Pompeo said.

Iran, meanwhile, warned that "harsh retaliation is waiting" for the U.S. following the strike that killed the leader of the Quds Force.

"Definitely there will be revenge. There will be harsh revenge," Iranian Ambassador to the U.N. Majid Takht Ravanchi told CNN's Erin Burnett on Friday. "Iran will act based on its own choosing, the time, the place" We will decide."

In his turn, President of Iran Hassan Rouhani promised early Friday to "take revenge for this heinous crime" carried out by the United States. Rouhani also said Iran would "raise the flag" of Soleimani, the head of the Islamic Revolutionary Guard Corps' elite Quds Force, "in defense of the country's territorial integrity and the fight against terrorism and extremism in the region."

The Iranian leadership is signaling that it will probably target US military installations and bases in the Middle East and mobilize its network of militias across the region.

Thus, the head of Iran's parliament's national security and foreign policy committee, Mojtaba Zul-Nur, said that some 36 US military bases and facilities are within reach of Iran's defense forces, with the closest being in Bahrain.

As you can see, the situation in the Middle East is changing rapidly.

Everyone understands that US provocation can lead to serious consequences to war. Since the assassination of Suleymani is not just a political assassination, but an attempt on Tehran's right to be an independent political player in the region.

Definitely, there will be an answer. It may not be right now, but the Iranian people is proud. Iran could response even tomorrow in Yemen or in Lebanon or in Israel, the U.S. reliable ally.

Furthermore, retaliation can reach all the countries provided their territories to the Americans. Iran could target any country where the U.S. has its military bases and troops.

As far as the position of influential neighbors with nuclear weapons (Pakistan and Russia) is concerned, this fall, Pakistan Senate Deputy Chairman Salim Mandvival said, "I think it is impossible to drive Iran into a corner. Iran obviously has its allies." He stressed that Pakistan has very good relations with Iran and the Muslim countries of the Middle East cannot fight each other, since such a war will lead to other wars.

The World is waiting for which side Russia will take. The position of Russia is still undefined, but obvious.