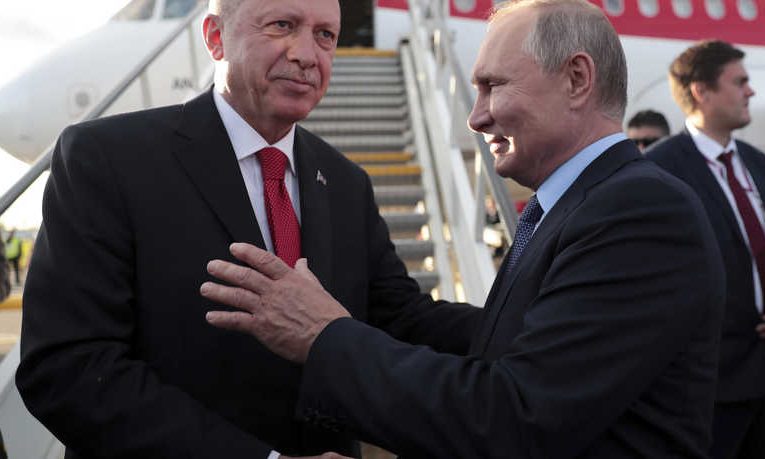 It should be recalled that Russia and Turkey were on opposing sides in the Syrian conflict and could be on a collision course in Libya. Last week, Turkey sent its first troops to help to defend Tripoli authorities, which is under siege from General Khalifa Haftar. Erdogan says 2,500 Russian mercenaries are among those supporting Haftar claims denied by Moscow.

However, the ceremony in Istanbul reflects a dramatic improvement in ties between Russia and Turkey two countries were on the verge of war after Turkey shot down a Russian jet.

At the same time, here are suggestions that the conversation between the leaders of Russia and Turkey was not limited by the topic of TurkStream.

Putin could recommend Erdogan to expel American troops from Turkey (Erdogan previously wanted to do this).

In exchange for this, Putin could promise Erdogan not to interfere in the internal affairs of Libya, but to provide such an opportunity to Turkey.

According to BulgarianMilitary.com, Erdogan has banned the U.S. from using the Incirlik airbase in the event in case the United States begins to strike on the territory of the Islamic Republic of Iran.

That's why the U.S. is reviewing the urgent withdrawal of its nuclear weapons from the Incirlik airbase.

The U.S.-operated Incirlik airbase, situated south of Turkey, is known to be used by Washington to stockpile nuclear weapons. A powerful early-warning radar is also stationed in the southeastern Kurecik base.

Putin's visits in Syria and Turkey came amid heightened tensions between Iran and the U.S., following the killing of a top Iranian general in the U.S. air raid in neighbouring Iraq.

Revolutionary Guard General Qassem Soleimani's death has sparked calls across Iran for revenge against the U.S.

Tehran has reacted by vowing bloody revenge: launched missile attacks on U.S.-led forces in Iraq in the early hours of Wednesday in retaliation for the U.S. drone strike on an Iranian commander whose killing has raised fears of a wider war in the Middle East. K.Soleimani was seen as one of the most powerful men in the region and the architect of Iran's support for the Syrian army.

Jonas Dringelis Editor of "balticword.eu"
Related Topic(s): Army; Iran; Nuclear; Russia And Turkey; Russia And Us Conflict; Soleimani; Strike; Syria; Vladimir Putin; Weapons; (more...) Withdrawal, Add Tags  (less...)
Add to My Group(s)
Go To Commenting
The views expressed herein are the sole responsibility of the author and do not necessarily reflect those of this website or its editors.