No wonder the wealth tax turns the Gray Lady white as a sheet: it will help the needy and its author is a good bet for president 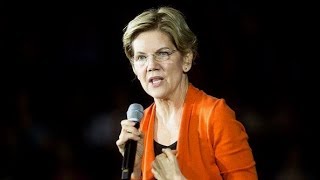 On Thursday, the New York Times reported on a study showing that Elizabeth Warren's proposed wealth tax (and presumably Bernie Sanders' even more ambitious version) would reduce economic growth by nearly 0.2% a year, over the course of a decade.

Under the headline "Warren Wealth Tax Could Slow the Economy, Early Analysis Finds," the Times trumpeted the analysis, from the Wharton School of the University of Pennsylvania, as "the first attempt by an independent budget group to forecast the economic effects" of a centerpiece of the Warren and Sanders campaigns.

Related Topic(s): Education; Green; Healthcare; Money; Warren-Elizabeth; Work, Add Tags
Add to My Group(s)
Go To Commenting
The views expressed herein are the sole responsibility of the author and do not necessarily reflect those of this website or its editors.