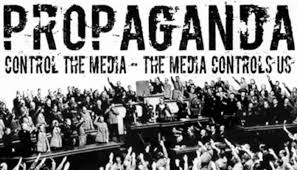 That's what National Security Adviser John Bolton had scrawled at the top of his notepad with which he walked into a briefing on Monday.

Does that mean we're planning on sending soldiers to Columbia?

Perhaps it has something to do with its neighbor, Venezuela.

Are we on the verge of fomenting a coup d'etat to oust Venezuelan president Nicola's Maduro?

Nothing would make the mainstream media more pleased.

As reported in Truthdig:

"The New York Times continued its long, predictable tradition of backing U.S. coups in Latin America by publishing an editorial praising Donald Trump's attempt to overthrow Venezuelan President Nicolas Maduro. This will be the 10th such coup the paper has backed since the creation of the CIA over 70 years ago."

Out of 12 U.S.-supported South American coups since the 1950s, the Times editorial board has supported 10.

If the corporate media actually revealed to the public the role the CIA and other U.S. intelligence agencies have always played, sometimes not so surreptitiously, perhaps there would be enough outcry to change the traditional trajectory.

But it's the mainstream media, so, as always, none of the Times' editorials says a word about our involvement. Instead, they make South American "cycles of violence" out to be organic, something dysfunctional in South American countries' governments that compel us to play the hero.

Here are some past quotes:

But let's not spend the entire piece bashing the Times.

Other mainstream outlets are hard at work spinning the myth as well.

Related Topic(s): Editorials; Intervention; Media And Democracy; Media Bias; Venezuelan Coup, Add Tags
Add to My Group(s)
Go To Commenting
The views expressed herein are the sole responsibility of the author and do not necessarily reflect those of this website or its editors.