Australia's prime minister took his government and the media to the NT to better understand the needs of Indigenous Australians. We're already awash with that knowledge 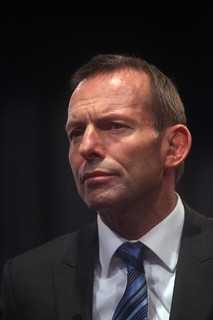 There are times when farce and living caricature almost consume the cynicism and mendacity in the daily life of Australia's rulers. Across the front pages is a photograph of a resolute Tony Abbott with Indigenous children in Arnhem Land, in the remote north. "Domestic policy one day," says the caption, "focus on war the next."

Reminiscent of a vintage anthropologist, the prime minister grasps the head of an Indigenous child trying to shake his hand. He beams, as if incredulous at the success of his twin stunts: "running the nation" from a bushland tent on the Gove Peninsula while "taking the nation to war." Like any "reality" show, he is surrounded by cameras and manic attendants, who alert the nation to his principled and decisive acts.

But wait; the leader of all Australians must fly south to farewell the SAS, off on its latest heroic mission since its triumph in the civilian bloodfest of Afghanistan. "Pursuing sheer evil" sounds familiar; of course, an historic mercenary role is unmentionable, this time backing the latest US installed sectarian regime in Baghdad and re-branded ex Kurdish "terrorists," now guarding Chevron, Exxon Mobil, Marathon Oil, Hunt Oil et al.

No parliamentary debate is allowed; no fabricated invitation from foreigners in distress is necessary, as it was in Vietnam. Speed is the essence. What with US intelligence insisting there is no threat from the Islamic State to America and presumably Australia, truth may deter the mission if time is lost. If this week's police and media show of "anti-terror" arrests in "the plot against Sydney" fails to arouse the suspicions of the nation, nothing will. That the unpopular Abbott's reckless war-making is likely to be self-fulfilling, making Australians less safe, ought to in headlines, too. Remember the blowback of Bush's and Blair's wars.

But what of the be-headings? During the 21 months between James Foley's abduction and his be-heading, 113 people were reportedly beheaded by Saudi Arabia, one of Barack Obama's and Tony Abbott's closest allies in their current "moral" and "idealistic" enterprise. Indeed, Abbott's war will no doubt rate a plaque in the Australian War Memorial alongside all the other colonial invasions acknowledged in that great emporium of white nationalism -- except, of course, the colonial invasion of Australia during which the be-heading of the Indigenous Australian defenders was not considered sheer evil.

This returns us to the show in Arnhem Land. Abbott says the reason he and the media are camped there is that he can consult with Indigenous "leaders" and "gain a better understanding of the needs of people living and working in these areas."

Australia is awash with knowledge of the "needs" of its first people. Every week, it seems, yet another study adds to the torrent of information about the imposed impoverishment of and vicious discrimination against Indigenous people: apartheid in all but name. The facts, which can no longer be spun, ought to be engraved in the national consciousness, if not the prime minister's. Australia has a rate of Indigenous incarceration higher than that of apartheid South Africa; deaths in custody occur as if to a terrible drumbeat; preventable Dickensian diseases are rampant, including among those who live in the midst of a mining boom that has made profits of a billion dollars a week. Rheumatic heart disease kills Indigenous people in their 30s and 40s, and their children go deaf and suffer trachoma, which causes blindness.

When, as shadow indigenous health minister in 2009, Abbott was reminded by the United Nations Special Rapporteur on Indigenous people that the Howard government's fraudulent "intervention" was racist, he told Professor James Anaya to "get a life" and "stop listening to the old victim brigade." The distinguished Anaya had just been to Utopia, a vast region in the Northern Territory, where I filmed the evidence of the racism and forced deprivation that had so shocked him and millions of viewers around the world. "Malnutrition," a GP in central Australia told me, "is common."

Today, as Abbott poses for the camera with children in Arnhem Land, the children of Utopia are being denied access to safe and clean drinking water. For 10 weeks, communities have had no running water. A new bore would cost just $35,000. Scabies and more trachoma are the result. (For perspective, consider that the Labor government's last Indigenous Affairs minister, Jenny Macklin, spent $331,144 refurbishing her office in Canberra).

In 2012, Olga Havnen, a senior Northern Territory government official, revealed that more than $80 million was spent on the surveillance of families and the removal of children compared with just $500,000 on supporting the same impoverished families. Her warning of a second Stolen Generation led to her sacking. This week in Sydney, Amnesty and a group known as Grandmothers Against Removals presented further evidence that the number of Indigenous children being taken from their families, often violently, is greater than at any time in Australia's colonial history.

Will Tony Abbott, self-proclaimed friend of Indigenous people, step in and defend these families? On the contrary, in his May budget, Abbott cut $536 million from the "needs" of Indigenous people over the next five years, a quarter of which was for health provision. Far from being an Indigenous "friend," Abbott's government is continuing the theft of Indigenous land with a confidence trick called "99-year leases". In return for surrendering their country -- the essence of Aboriginality -- communities will receive morsels of rent, which the government will take from Indigenous mining royalties. Perhaps only in Australia can such deceit masquerade as policy.

Similarly, Abbott appears to be supporting constitutional reform that will "recognize" Indigenous people in a proposed referendum. The "Recognize" campaign consists of familiar gestures and tokenism, promoted by a PR campaign "around which the nation can rally," according to the Sydney Morning Herald -- meaning the majority, or those who care, can feel they are doing something while doing nothing.

During all the years I have been reporting and filming Indigenous Australia, one "need" has struck me as paramount. A treaty. By that I mean an effective Indigenous bill of rights: land rights, resources rights, health rights, education rights, housing rights, and more. None of the "advances" of recent years, such as Native Title, has delivered the rights and services most Australians take for granted.

As Arrente/Amatjere leader Rosalie Kunoth-Monks says: "We never ceded ownership of this land. This remains our land, and we need to negotiate a lawful treaty with those who seized our land." A great many if not most Indigenous Australians agree with her; and a campaign for a treaty -- all but ignored by the media -- is growing fast, especially among the savvy Indigenous young unrepresented by co-opted "leaders" who tell white society what it wants to hear.

That Australia has a prime minister who described this country as "unsettled" until the British came indicates the urgency of true reform -- the end of paternalism and the enactment of a treaty negotiated between equals. For until we, who came later, give back to the first Australians their nationhood, we can never claim our own.

This article originally written for The Guardian

John Pilger grew up in Sydney, Australia. He has been a war correspondent, author and documentary film-maker. He is one of only two to win British journalism's highest award twice, for his work all over the world. On 1 November, he was awarded (more...)
Related Topic(s): Australian Politics; Indigenous Cultures; Injustice; People, Add Tags
Add to My Group(s)
Go To Commenting
The views expressed herein are the sole responsibility of the author and do not necessarily reflect those of this website or its editors.