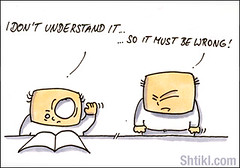 I don't understand it.
(Image by shtikl from flickr)   Details   DMCA
When I turned 21 and was first eligible to vote, I went to the polls and filled out a paper ballot. Computers were mostly a laboratory curiosity then so the ballots were to be hand-counted. But we did put an X in a box to indicate our votes and as I recall, I accidentally put a stray mark in a box that conflicted with how I wanted to vote. I tried to erase the mark, but just to make sure I wrote a short note on the ballot to explain the stray mark. Later, I learned that the note had most likely invalidated my entire ballot.

A couple lessons can be learned from this little story. One is that it is sometimes important for voters to know even small details about how ballots are counted. But the second lesson is that when in doubt, a voter might mistakenly assume that the ballots will be counted in what seems the sensible manner. This second observation leads to a third, that it is best to design a voting system to do what seems sensible.

Maine has recently adopted Instant Runoff Voting(IRV) where voters are asked to list all of the candidate in order of preference, starting with the candidate they most favor. But in addition, they are advised that they don't need to list every single candidate, it is fine to submit an abbreviated list. With these instructions, it seems likely that many voters will make sure to list all candidates they care about. In addition to starting the list with the candidates they favor, they will make sure to put any candidate that they oppose at the end of their list. However, they will just not include several candidates they know nothing about or who they are ambivalent about. For certain, they will not include all of the write-in candidates that other voters may have put in their lists.

But it is likely that the typical voter will fail to appreciate the fact that these unlisted candidates are, as a consequence of how the ballots are counted, effectively at the bottom of the list, below even the voter explicitly list last as an expression of opposition. In reality, the voter should have left off the list the candidates the voter strongly opposes and probably should have included others that they do not particularly dislike near the end of the list they submitted.

Complicated voting systems might be inherently difficult to explain and even when properly explained the details may be hard for voters to absorb and remember. But often it does matter whether the voter understands how the system works. With IRV, voters are likely not to appreciate all of the details and they will be mistaken if they just assume that when candidates are left off the list the vote counting will make things work sensibly. This misunderstanding could even distort election outcomes.

With plurality voting, or for that matter with approval voting, we just count all of the votes cast for a candidate and let the winner be the candidate with the most votes. Voting theorists will point out that this amounts to assigning either a 1 to a vote for a candidate and 0 otherwise and just add up the assigned values for each candidate. But they will also point out that we could just as well assign 23 in place of 1 and 17 in place of 0 and the winner would not change. But most people would be mystified by actually taking such an approach. Even if they understood what was being done they might wonder why the counting would be done in such a peculiar way.

But what if, instead of 23 and 17 the assignment were 1 and -1. They might come to suspect they are being tricked into thinking that they have the opportunity to vote against a candidate. The winner would still be the same as with the 1 and 0 assignment.

At issue is the fact that 0 just seems like the appropriate label to use for a neutral vote. But using -1 instead of 0 may suggest (incorrectly in this case) a vote against the candidate. In our arithmetic and in our thinking, zero is a very special number; adding zero to any other number is neutral; it does nothing. Misleading the voter by designating neutrality with -1 or with 17 serves little purpose unless it is to confuse voters.

Recently, I wrote a retrospective article that stated three desirable properties for a voting system and the very first of these properties was logical completeness. The idea is that when a voter is asked to choose from among several choices the list of choices should exhaust all of the possibilities; the voter should not be left to ponder what to do when none of the available choices seem truthful; put another way, one of the choices should be a choice of neutrality. For example, if the voter is asked to choose from "support" and "oppose" there should also be a choice of neutrality for the voter who neither supports nor opposes the candidate. In the interest of clarity then, if the voter is asked to choose from several numbers then in the interest of voter understanding, one of those numbers should best be zero as an indication of neutrality. This could be an implicit option, however; not even mentioning the neutral option on the ballot but rather just assigning that value when the voter fails to specify one is a simplification that should be considered actual ballots.

Specialists in voting theory tend to approach the topic abstractly, ignoring inessential details such as voter comprehension as irrelevant. From this point of view, it simply does not matter whether a voter is asked to rate candidates using the numbers -1, 0, +1 or alternatively using the numbers 1, 2, 3. In actual practice though, voters may fail to comply and simply skip over the candidates that don't interest them, not rating them at all. In fact a majority of the voters may skip over and not assign a number to a few of the candidates. How do the vote counter handle those ballots? A good approach would be to assign a default rating, preferably zero if that is one of the values. But what if the available values are 1, 2, 3? Logically, if we are committed to the notion of -1, 0, +1 being the same as 1, 2, 3 then we should choose the value corresponding to 0, namely 2, as the default value, but there seems to be a tendency to neglect that commitment and instead use 1 as the default value. Would that make any difference?

But here on earth, voters are emotional human beings who only rarely are perfectly rational. We often base decisions on emotions and analogies much more than on logic. That is why the advertising industry is so successful in shaping our decisions, not only on what hair-spray or deodorant to use but on how to vote and on how we should think about important issues. It probably is also why we can make decisions at all when time for thinking is limited.

The corresponding table for the more natural choice of scores, -1, 0, 1 would be:

Entries in the right side of this table for a default assignment of 0 can be thought of as net votes, making the table (like the voting system) easy to comprehend.

Related Topic(s): Choice; Vote Counting; Voting; Voting Integrity; Voting Methods; Voting Reform; Voting Results; Voting Technology, Add Tags
Add to My Group(s)
Go To Commenting
The views expressed herein are the sole responsibility of the author and do not necessarily reflect those of this website or its editors.