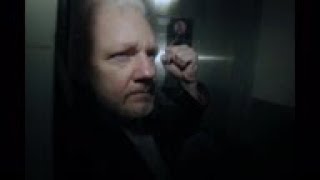 I set out at dawn. Her Majesty's Prison Belmarsh is in the flat hinterland of south east London, a ribbon of walls and wire with no horizon. At what is called the visitors center, I surrendered my passport, wallet, credit cards, medical cards, money, phone, keys, comb, pen, paper.

I need two pairs of glasses. I had to choose which pair stayed behind. I left my reading glasses. From here on, I couldn't read, just as Julian couldn't read for the first few weeks of his incarceration. His glasses were sent to him, but inexplicably took months to arrive.

There are large TV screens in the visitors center. The TV is always on, it seems, and the volume turned up. Game shows, commercials for cars and pizzas and funeral packages, even TED talks, they seem perfect for a prison: like visual valium.

I joined a queue of sad, anxious people, mostly poor women and children, and grandmothers. At the first desk, I was fingerprinted, if that is still the word for bio-metric testing.

"Both hands, press down!" I was told. A file on me appeared on the screen.

I could now cross to the main gate, which is set in the walls of the prison. The last time I was at Belmarsh to see Julian, it was raining hard. My umbrella wasn't allowed beyond the visitors center. I had the choice of getting drenched, or running like hell. Grandmothers have the same choice.

At the second desk, an official behind the wire, said, "What's that?"

"My watch," I replied guiltily.

So I ran back through the rain, returning just in time to be bio-metrically tested again. This was followed by a full body scan and a full body search. Soles of feet; mouth open.

At each stop, our silent, obedient group shuffled into what is known as a sealed space, squeezed behind a yellow line. Pity the claustrophobic; one woman squeezed her eyes shut.

We were then ordered into another holding area, again with iron doors shutting loudly in front of us and behind us.

"Stand behind the yellow line!" said a disembodied voice.

Another electronic door slid partly open; we hesitated wisely. It shuddered and shut and opened again. Another holding area, another desk, another chorus of, "Show your finger!"

John Pilger grew up in Sydney, Australia. He has been a war correspondent, author and documentary film-maker. He is one of only two to win British journalism's highest award twice, for his work all over the world. On 1 November, he was awarded (more...)
Related Topic(s): Extradition; Julian Assange Imprisonment; Political Prisoner, Add Tags
Add to My Group(s)
Go To Commenting
The views expressed herein are the sole responsibility of the author and do not necessarily reflect those of this website or its editors.