This public forum, entitled "The Outer Limits of Solitary Confinement," held at UC Hastings College of the Law, in San Francisco on April 6, 2012 was organized by the International Coalition to Free the Angola 3, and co-hosted by the Hastings chapter of the National Lawyers Guild and the Hastings Race and Poverty Law Journal.

The keynote speaker was Robert H. King, of the Angola 3, released in 2001 when his conviction was overturned, after 29 years of continuous solitary confinement. King says today that "being in prison, in solitary was terrible. It was a nightmare. My soul still cries from all that I witnessed and endured.  It does more than cry- it mourns, continuously."

At the UC Hastings event, King spoke about the Amnesty International petition demanding transfer from solitary and the broader struggle to release Wallace and Woodfox from prison altogether. Interviewed in a recent video by Amnesty International, King says about Wallace and Woodfox: "All evidence shows that they were targeted simply for being members of the Black Panther Party. There is really no evidence, forensic, physical, or otherwise, linking them to the crime. When I think about the ten years in which I've had time to be out here, that is ten more years that they are there."

In their investigative report, Amnesty International similarly concluded that "no physical evidence links Woodfox and Wallace to the murder." Even further: "potentially favorable DNA evidence was lost. The convictions were based on questionable inmate testimony"it seems prison officials bribed the main eyewitness into giving statements against the men.  Even the widow of the prison guard has expressed skepticism, saying in 2008, "If they did not do this -- and I believe that they didn't -- they have been living a nightmare for 36 years!'"
Currently held inside California's notorious Pelican Bay State Prison, Hugo "Yogi Bear" Pinell, of the San Quentin Six, has now been in continuous solitary for at least 42 years.  A participant in the recent statewide prisoner hunger strike, Pinell was a close comrade of Black Panther and prison author, George Jackson. Having been continually denied parole despite a clean record for the last 27 years, Pinell is, in the words of the Angola 3's own Robert H. King, "a clear example of a political prisoner." His next parole hearing is scheduled for this May.

The stories of the Angola 3 and Hugo Pinell are the most extreme examples of a widespread human rights crisis in US prisons, where prolonged solitary confinement has become routine. According to www.solitarywatch.com, there are "at least 75,000 and perhaps more than 100,000 prisoners in solitary confinement on any given day" in the US.

On March 20, several human rights organizations jointly filed a petition to the United Nations Group on Arbitrary Detention, the United Nations Human Rights Council, and United Nations General Assembly on behalf of prisoners throughout California's Security Housing Units (SHU) and Administrative Segregation Units (ASU).  The petition calls for UN action against California's prison administration and deplores the conditions of thousands of California prisoners, "being detained in isolated segregated units for indefinite periods or determinate periods of many years solely because they have been identified as members of gangs or found to have associated with a gang."

The petition states further that "as a result of the policies and practices that leave California with the largest population of prisoners in isolated segregation anywhere in the world, these prisoners suffer extreme mental and physical harm, including mental breakdowns, extreme depression, suicidal ideation, and breaks with reality, such that their treatment may be considered torture or degrading treatment illegal under well-established international norms and obligations of the United States and the State of California under, inter alia, the United Nations Convention Against Torture and Other Cruel, Inhumane or Degrading Treatment or Punishment ("CAT') and the International Covenant on Civil and Political Rights ("ICCPR')."

Fueled by the racist "War On Drugs," and the broader criminalization of poverty, the US prison population has exploded from less than 300,000 prisoners in 1970 to over 2.4 million today. This 40-year policy of mass incarceration has turned the US into literally the world's #1jailer--with the world's highest incarceration rate and total number of prisoners. 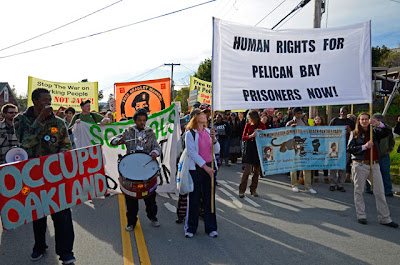 We declare that this human rights atrocity known as the "criminal justice system" has now reached its outer limits. This cannot continue! It is becoming increasingly clear to the public that prolonged solitary confinement is nothing other than state torture.

The recent collaboration of prison activists and Occupy Wall Street, Occupy 4 Prisoners, marks a renewed linking of economic justice activism to a critique of mass incarceration and the criminalization of poverty. As Robert H. King said in his message to Occupy 4 Prisoners, "the same people who make the laws that favor the bankers, make the laws that fill our prisons and detention centers. We have to continue to make the connection between Wall St. and the prison industrial complex." The upcoming "Occupy the Justice Department" action in Washington DC on April 24 is calling for the release of Mumia Abu-Jamal and all political prisoners.

The strength of the 99% is in our numbers. Our only hope is to unite against the 1%. A newly-formed multiracial coalition of hunger strikers throughout California's prisons (most recently at Corcoran State) has demanded an end to prolonged solitary confinement and many other inhumane policies. These freedom fighters are on the frontlines of the struggle and they badly need our support. Our event is being held to give voice to their struggle and to present the audience with opportunities to show their support.

Over 40 years ago in Louisiana, 3 young black men were silenced for trying to expose continued segregation, systematic corruption, and horrific abuse in the biggest prison in the US, an 18,000-acre former slave plantation called Angola. In 1972 and (more...)
Related Topic(s): Activism; Activism; Angola State Prison; International; Justice; Law; Laws; Occupy; Poverty; Prisoners; (more...) Protest; Race; Rights; Solitary Confinement; Torture, Add Tags  (less...)
Add to My Group(s)
Go To Commenting
The views expressed herein are the sole responsibility of the author and do not necessarily reflect those of this website or its editors.