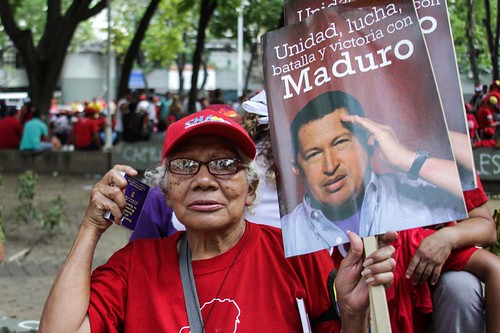 2013 election in Venezuela
(Image by Joka Madruga)   Details   DMCA
I felt compelled to write this article after viewing a Dec. 7 CNN video report titled "'The stench is unbearable': Inside horrific Venezuelan Covid-19 ward." The video opens with a young woman bending over the hospital bed of her father who is suffering from malnourishment. Despite his weakened immune system, he is in a ward with very contagious patients, including one with COVID 19. She says that the hospital lacks the medicine he needs, and she will have to obtain it herself. The hospital is short of funds for medicine, staff, equipment, utilities and even cleaning supplies. Down the hall two dead rats lie on the floor where they have been for days.

We are told that this hospital, like most in the country, is on the verge of collapse. "Years of government mismanagement have left Venezuelan healthcare grossly unprepared and under-resourced to handle the Covid-19 pandemic. Over the past decade the country has squandered most of its oil wealth, plunging into a deep economic crisis and humanitarian crisis."

CNN's explanation of the economic and humanitarian crisis in Venezuela is a lie. It's one of the countless lies that corporate media and the government feed to a credulous public that doesn't want to know about our nation's imperial and often murderous foreign policy. It's generally recognized that, as I. F. Stone famously said, "all governments lie." Some combination of greed, ignorance and fear causes our press and broadcast media to regularly parrot these lies.

In this case, the lie is to blame the Venezuelan government for the catastrophic effects of economic sanctions imposed by the United States. The sanctions began under Obama in 2015 and increased drastically under Trump. The U.S. has used its controlling influence over the international banking system to block banks and businesses from transactions with Venezuela. According to Richard Hanania, "From 2016 to 2019, GDP per capita income of [Venezuela] dropped from $9,090 to a projected $2,550" (Cato Institute, 2/18/20).

As Mark Weisbrot and Jeffrey Sachs reported for the Center for Economic and Policy Research, Trump's January 2019 sanctions "froze many billions of dollars of Venezuelan assets that could have been sold in order to maintain essential and life-saving imports, or to stabilize the economy. These included most of the government's $9 billion in reserves that are in gold; trade credits worth an estimated $3.4 billion; and CITGO, with estimated net assets of $5.2 billion" (CEPR 4/19). The authors found that sanctions in 2017-18 caused more than 40,000 deaths. Since the 2019 sanctions are much more severe, we can expect they will be "a death sentence for tens of thousands" more. Former UN special rapporteur Alfred de Zayas, who visited Venezuela in late 2017, states that "this is a matter for the International Criminal Court pursuant to article 7 of the Rome Statute, which defines 'crimes against humanity'" (Independent, 2/7/19).

According to Reuters, the 2019-2020 National Survey of Living Conditions published by the Andre's Bello Catholic University in Caracas reports that "96% of the population lives in poverty, a figure unmatched elsewhere in the region and comparable to poor African countries like Nigeria or Chad." It's hard to believe that in 1999, when Hugo Chavez became President, Venezuela was the wealthiest country in South America. It continues to have the largest known oil reserves of any nation.

Oil has been the country's greatest strength and weakness. In 2012 oil was 95% of Venezuela's export revenue. The best discussion I've read of Venezuela's economic monoculture is an essay by Adam Kott in the Journal of Strategic Security (Fall, 2012). As Kott points out, "Over-reliant countries put their fate in the hands of a capricious global commodity market that regularly cycles through booms and busts. In the case of oil, prices have shifted as much as 70 percent in a year's time." When Chavez became President, he was gifted with a 6-year bonanza of rising oil prices which gave him revenue to spend lavishly on beneficial social programs.

It would have been better for Chavez to spend some of the surging oil revenue on developing a capacity to produce other products for export, and also set aside some to cushion against oil market price declines. But this would have the opportunity cost of delaying some of the social development programs that won the gratitude of his people. So instead of making the correct but hard choices, he overspent and ended up with a growing national debt, rising inflation and political turmoil.

Venezuela is not a threat to the U.S. It hasn't attacked or otherwise harmed us. Why is our government victimizing its people? There are allegations that Maduro is a dictator brutally repressing political opponents. The truth is hard to sort out from American propaganda here. The U.S. has repeatedly tried to engineer regime change during the terms of Chavez and Maduro. It even supported a failed coup in 2002 that was overturned in 2 days.

As Leonardo Flores reports in Common Dreams, "Venezuela held legislative elections on December 6 and, as has become the norm, the U.S. and sectors of the opposition that boycotted the election are claiming fraud without presenting evidence." Maduro's socialist coalition won 68% of the vote. The elections were monitored by 1,500 observers and 300 representatives from 34 countries. The results were a rebuff of U.S. policy and interference. It's no surprise that the U.S. has just added to its sanctions by punishing a Venezuelan firm that provided services during the Dec. 6 election.

We should recall that shortly before Chavez decisively won reelection in 2012, Jimmy Carter had this to say of Venezuelan elections: "As a matter of fact, of the 92 elections that we've monitored, I would say that the election process in Venezuela is the best in the world."

The question remains: why is the U.S. government willing to kill so many Venezuelans in order to overthrow their elected government? They answer is clear: Venezuela has committed socialism. It must be 'liberated.' You won't hear the sounds of bombs being dropped. Instead, people will be murdered slowly and quietly.

Related Topic(s): Propaganda; Sanctions; Sanctions; Socialism; Venezuela; Venezuelan Coup, Add Tags
Add to My Group(s)
Go To Commenting
The views expressed herein are the sole responsibility of the author and do not necessarily reflect those of this website or its editors.