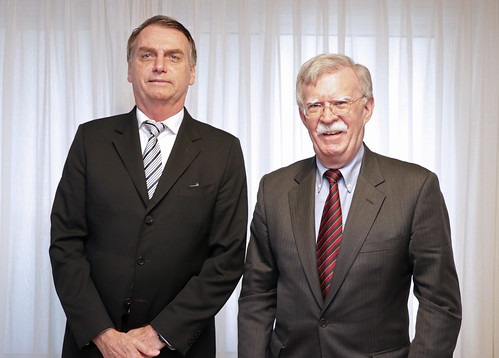 Bolsonaro and Bolton meeting
(Image by Embaixada dos EUA - Brasil)   Details   DMCA
We can book-end 120 years of U.S. intervention in Latin America with two events. The first is the career of Major General Smedley Butler (USMC) as he described it in his 1935 book War Is A Racket. Butler's awards included two Medals of Honor, the Distinguished Service Medal and the Brevet Medal. Here's what he had to say about his 33 years of service:

I spent most of my time as a high-class muscle man for Big Business, for Wall Street and the bankers. In short, I was a racketeer, a gangster for capitalism. . . .I helped in the raping of half a dozen Central American republics for the benefit of Wall Street. "I helped make Honduras right for the American fruit companies in 1903.

The second book-end is National Security Advisor John Bolton's visit on Nov. 29 with Jair Bolsonaro, the fascistic president-elect of Brazil. Bolsonaro is an avowed homophobe, racist, sexist, advocate of torture and admirer of the military dictatorship that ruled Brazil from 1964 to 1985. As he said in 2008: "The only mistake of the dictatorship was torturing and not killing."

After the meeting, Bolton tweeted: "We enjoyed a broad and productive discussion with the president-elect of Brazil and his security team." Although Bolton made no press statement after this meeting, we can guess what his message was from his speech to a group of Cuban-Americans in Miami earlier in November.

Bolton told them that, just as in its 1960s confrontation with Castro's Cuba, the U.S. is once again battling "the destructive forces of oppression, socialism, and totalitarianism." (Notice the implicit equation of "socialism" with communism. He goes on to make the equation explicit:) "This Troika of Tyranny, this triangle of terror stretching from Havana to Caracas to Managua, is the cause of immense human suffering, the impetus of enormous regional instability, and the genesis of a sordid cradle of communism in the Western Hemisphere."

The U.S. wants regime change in Cuba, Venezuela and Nicaragua. As John H. Coatsworth explained in ReVista, the Harvard Review of Latin America, "from 1898 to 1994, the U.S. government has intervened successfully to change governments in Latin America a total of at least 41 times." These interventions were not acts of self-defense. As Coatsworth points out, if the U.S. had left these countries alone, "It is unlikely that any significant threat would have materialized." This is just as true today for Bolton's "Troika of Tyranny."

What Bolton's Troika have in common is the same thing that Smedley Butler spent 33 years punishing: rebellion against a hemispheric capitalist system run by the U.S. Their sin is "socialism," which Bolton's rhetoric tries to link with the soviet-style communism of 1960s Cuba. He is invoking the memory of 13 days of terror Americans felt during the Cuban missile crisis of October, 1962.

After Castro overthrew the U.S-backed dictatorship of Fulgencio Batista in 1959, the U.S. relationship with the Castro regime quickly deteriorated. The Kennedy administration organized an invasion of Cuba by 1500 exiles at the Bay of Pigs in 1961. When Castro repelled the invasion, the CIA engaged in an obsessive campaign of sabotage and assassination attempts on Castro. This pushed Castro into a military alliance with the Soviet Union, which included receiving Russian nuclear-armed missiles as a defense against the U.S.

When aerial reconnaissance revealed the Russian missiles in Cuba, Kennedy announced on national television that he had ordered a naval blockade on Cuba until the USSR removed the weapons. The U.S. engaged in an illegal act of war--a blockade--against a nuclear power (the Soviet Union) in order to halt Cuba's legal acquisition of nuclear missiles for self-defense.

Historians have gained access to recordings that Kennedy secretly made of meetings with his top advisers. They reveal that Kennedy agreed with his advisors that the Russian missiles did not affect the strategic balance of nuclear arsenals between Russia and the U.S. Nevertheless, as a political justification for risking a catastrophic nuclear war, he told Americans that the Russian missiles were an immediate existential threat to the U.S.

The Soviet Union no longer exists, Russia is now a Christian, authoritarian capitalist state and no longer a military ally of Cuba. Fidel Castro is dead, and his brother has retired from the presidency. But Cuba is still a one-party communist state. President Obama restored diplomatic relations with Cuba in 2015, but President Trump has reversed the process of reconciliation and, as Bolton's speech makes clear, is pushing for regime change. A 1996 law, still in effect, requires an economic embargo against Cuba until it becomes a full-fledged democracy.

Most Americans fail to grasp the utter hypocrisy and imperial arrogance of U.S. policy toward Cuba and the rest of Latin America. The U.S. is largely responsible for the violence and corruption that has led to caravans of refugees reaching our border. As Georgie Anne Geyer writes in the Chicago Sun-Times, when El Salvador, Guatemala and Honduras were trying to improve life in the 20th century, the U.S. did the bidding of corporations such as the United Fruit Company "to support military dictators and far-right candidates who kept Central America locked in the hopeless despair that still drives tens of thousands of them to El Norte."

Venezuela and Nicaragua, members along with Cuba, of Bolton's Troika of Tyranny, are now under relentless siege from the U.S. Both are targeted for regime change. Neither has attacked the U.S. or any other country. Both are democracies with internal conflicts between combinations of the wealthy and some middle-class elements on the one hand, and those who have benefited from the redistributionist policies of their socialist governments. Each side cries foul when it loses an election.

Instead of offering constructive assistance, the U.S. is imposing crippling economic sanctions on each country. It continues to play the capitalist gangster described by Smedley Butler, favoring corporate-friendly authoritarian regimes and undermining those that commit the sin of socialism.

Related Topic(s): American Capitalism; American Empire; American Foreign Policy; American Hypocrisy; Capitalism; Intervention; Socialism; Socialism, Add Tags
Add to My Group(s)
Go To Commenting
The views expressed herein are the sole responsibility of the author and do not necessarily reflect those of this website or its editors.