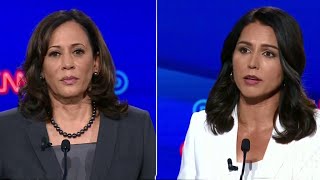 It is unfortunate that Tulsi Gabbard succumbed to the Israel Lobby. The forces of the Empire saw it as a sign of weakness and have set about destroying her.

The ruling elite see Gabbard as a threat just as they saw Trump as a threat. A threat is an attractive political candidate who questions the Empire's agenda. Trump questioned the hostility toward Russia orchestrated by the military/security complex. Gabbard questions the Empire's wars in the Middle East. This is questioning that encroaches on the agendas of the military/security complex and Israel Lobby. If fear of Israel is what caused Gabbard to vote the AIPAC line on the bill forbidding criticism of Israel, she won't be able to stick to her line against Washington's aggression in the Middle East. Israel is behind that aggression as it serves Israeli interests.

But the Empire is taking no chances. The Empire has sicced its Presstitute Battalion on her. Josh Rogin (Washington Post), Joy Reid (MSNBC), Wajahat Ali (New York Times and CNN), and, of course the Twitter trolls paid to slander and misrepresent public figures that the Empire targets. Google added its weight to the obfuscation of Gabbard.

Gabbard, who in the second "debate" between Democratic Party candidates for the Democratic presidential nomination, took down the despicable Kamala Harris with ease, was promptly labeled "an Assad apologist" and a conspiracist with Russia to put herself as a Putin agent in the White House.

Wars in the Middle East against Israel's enemies and preparation for major wars against Iran, Russia, and China are the bread and butter for the powerful US military/security complex lobby. All that is important to the military/security complex is their profits, not whether they get all of us killed. In other words, their propaganda about protecting America is a lie. They endanger us all in order to have enemies in order to justify their massive budget and power.

Those of us who actually know, such as myself and Stephen Cohen, have been warning for years that the orchestrated hostility against Russia is producing a far more dangerous Cold War than the original one. Indeed, beginning with the criminal George W. Bush regime, the arms control treaties achieved at great political expense by US and Soviet leaders have been abandoned by Washington. The latest treaty to be discarded by Washington in service to the military/security lobby is the Intermediate-Range Nuclear Forces Treaty (INF) negotiated by President Ronald Reagan and Soviet leader Mikhail Gorbachev. This treaty banned missiles that Washington could place in Europe on Russia's border with which to attack Russia with little or no reaction time, and Russian missiles that could be used to attack Washington's NATO puppet states in Europe and UK. The treaty resulted in the elimination of 2,692 missiles and a decade of verification inspections that satisfied both parties to the agreement. But suddenly Washington has pulled out of the treaty. The main purpose of pulling out of the treaty is to enable the military/security complex to develop and produce new missiles at the taxpayers' expense, but Washington also sees a military advantage in withdrawing from the INF treaty.

Washington, of course, blames the US withdrawal on Russia, just as Washington blames every country that Washington intends to attack. But it is completely obvious, even to a moron, that Russia has no interest whatsoever in abandoning the treaty. Russian intermediate-range missiles cannot reach the United States. Russia has no reason to attack Europe, which has no military forces of any consequence. It is the American nuclear missiles on European soil that are the problem.

Washington, however, does gain by tearing up the INF treaty. At Europe's risk, not America's, Washington's intermediate-range nuclear missiles stationed in Europe on Russia's borders permit a preemptive nuclear attack on Russia. Because of proximity, the warning time is only a couple of minutes. Washington's crazed war planners believe that so much of the Russian retaliatory capacity would be destroyed, that Russia would surrender rather than retaliate with diminished forces and risk a second attack.

Putin stresses this danger as does the Russian military. US missiles on Russia's border puts the world on a hair trigger. Aside from the fact that a nuclear attack on Russia is the likely intent of the criminal neoconservatives, nuclear warning systems are notorious for false alarms. During Cold War I, both sides worked to build trust, but since the criminal Clinton regime Washington has worked to destroy all trust between the two dominant nuclear powers. All that is required to obliterate life on earth, thanks entirely to the crazed fools in Washington, is one false alarm received by the Russians. Unlike past false alarms, next time the Russians will have no choice but to believe it.

Intermediate-range nuclear missiles leave no time for a phone call between Putin and Trump. The Russian leader who has suffered hundreds of diplomatic insults, demonization of his person and his country, illegal sanctions, endless false accusations, and endless threats cannot assume that the warning is false.

The idiots in Washington and the presstitutes have programmed the end of the world. When the alarm goes off, the Russian leader has no choice but to push the button.

Any remaining doubt in the Russian government of Washington's hostile intentions toward Russia has been dispelled by Trump's National Security Adviser, the neocon warmonger John Bolton. Bolton recently announced that the last remaining arms control agreement, START, will not be renewed by Washington in 2021.

Thus, the trust built between the nuclear powers that began with President John F. Kennedy and reached its greatest success with Reagan and Gorbachev has been erased. It will be lucky if the world survives the destruction of trust between the two major nuclear powers.

The American government in Washington has been made so utterly stupid by its arrogant hubris that it has no comprehension of the dangerous situation that it, and it alone, has created. We are all at risk every minute of our lives because of the power, of which President Eisenhower warned us more than a half century ago to no avail, of the US military/security complex, an organized powerful force determined and able to destroy any American president who would threaten their budget and power by making peace.

Related Topic(s): Demonization; Gorbachev; Israel; Neoconservatives; Presstitutes; Putin; Trump; Tulsi Gabbard, Add Tags
Add to My Group(s)
Go To Commenting
The views expressed herein are the sole responsibility of the author and do not necessarily reflect those of this website or its editors.