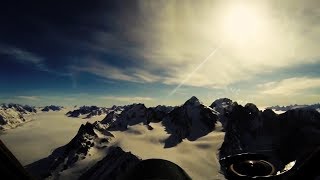 "Climate change is not identified as a national security threat but climate and the importance of the environment and environmental stewardship are discussed," a senior administration official explained to the Guardian.

The move reflects the Trump administration's stance -- and downright indifference -- towards global warming. In June, the president announced his intention to withdraw the U.S. from the landmark Paris climate agreement.

Another official explained to the Guardian that Trump's remarks about exiting the Paris agreement "would be the guidepost for the language in the [national security strategy] on climate."

Trump had said that June: "I was elected to represent the citizens of Pittsburgh, not Paris," and claimed the Paris accord "hamstrings the United States while empowering some of the world's top polluting countries."

According to the Federalist, which first obtained a draft document of the national security strategy, the Trump administration would actively oppose efforts to reduce the burning of fossil fuels for energy.

"U.S. leadership is indispensable to countering an anti-growth, energy agenda that is detrimental to U.S. economic and energy security interests," the document stated, per the Federalist.

"Given future global energy demand, much of the developing world will require fossil fuels, as well as other forms of energy, to power their economies and lift their people out of poverty."

Wow, it's snowing in Israel and on the pyramids in Egypt. Are we still wasting billions on the global warming con? MAKE U.S. COMPETITIVE!
6:32 PM - Dec 14, 2013

Related Topic(s): Climate Change; National Security; Threat; Trump Against Climate Change, Add Tags
Add to My Group(s)
Go To Commenting
The views expressed herein are the sole responsibility of the author and do not necessarily reflect those of this website or its editors.