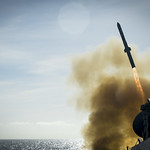 Don't take this statement as "expert" analysis. It is just my gut feeling that the timing of the missile attack on Syria was not motivated by moral outrage over the previous poison-gas attack, supposedly by Assad's forces. The hurried "proof" offered of responsibility for that attack was no more convincing than the Weapons of Mass Destruction proof given for starting the Iraq war, as others have pointed out. Never mind that so many nations world-wide supported our attack.

Certainly, steps should be taken to remove Russia's decisive participation in Syria, justified by it being "invited" to help defend Assad's government. But justified civil wars are an internal matter that occur when negotiation fails to rectify intolerable policies of an existing government, and the outcome should not be determined by outside nations having their own interests at stake, as we have been so often involved. (If only that were true; even our own War of Independence depended on France's intervention. To my knowledge, there was no significant foreign intervention in our Civil War.)

Before Russia's intervention, the Syrian uprising seemed to be progressing well towards a victory of the Arab Spring awakening over archaic forces of oppression.

If we stop to think about it, it appears that the missile attack was opportunistically timed to coincide with Trump's rapidly declining approval ratings and conspicuous failures in the short term he has been in office. Brash military moves usually rally patriotic support among the vast majority and push other issues to the background. This might help Trump's ratings, and getting some of his reactionary policies passed through Congress and Gorsuch appointed to the Supreme Court. What will happen to Trump's hints of detente with Russia? Intensified "cold war", with China supporting Russia? Is he making America safe? Perhaps this move was not well thought-out.

Related Topic(s): Bashar Al-assad; Intervention; Syria, Add Tags
Add to My Group(s)
Go To Commenting
The views expressed herein are the sole responsibility of the author and do not necessarily reflect those of this website or its editors.