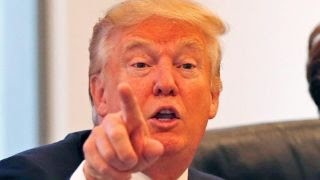 U.S. President Donald Trump is a serial liar who appears to exult, if not take pride, in every petty deceit, particularly if it casts him into the glare of publicity.

With Trump preparing to meet with North Korea's Kim Jong Un in Singapore in a highly anticipated summit this week, it's worth a reminder: Not unlike Kim, Trump lies to hide the brutality of his cruel policies. He lies to discredit reliable sources of information and to discredit those public institutions that educate a public to create informed citizens who are able to distinguish between the truth and falsehoods.

He will lie about the summit. He can't help himself.

The Washington Post reports that in his first 466 days in office, Trump has made more than "3,001 false or misleading statements," averaging "about nine claims a day."

He has falsely claimed 72 times that he passed the biggest tax cut in history; incorrectly states that he has eliminated Obamacare; and fallaciously argues that the Democrats were responsible for eliminating DACA (the Deferred Action for Child arrivals that he terminated).

Most recently, the New York Times reported that Trump's lawyers have admitted that the president drafted a misleading statement about a meeting his son had with a lawyer associated with the Kremlin in Trump Tower, though for months he denied it.

"The truth is dangerous"

In Trump's Orwellian world, the truth is dangerous, thinking is a liability, and the sanctity of free speech is treated with disdain, if not the threat of censorship.

Trump uses an endless stream of tweets in which the truth is distorted for ideological, political or commercial reasons. Under the Trump administration, lying and the spectacle of fakery have become an industry and tool of power.

Related Topic(s): Donald Trump Lies; Fascist; Fiction; Language; Lies Liars; Loyalty; Orwellian; Trump Attacks Media; Trump Ego, Add Tags
Add to My Group(s)
Go To Commenting
The views expressed herein are the sole responsibility of the author and do not necessarily reflect those of this website or its editors.