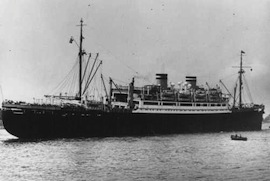 In 1939 the luxury liner St. Louis brought 937 desperate, mostly Jewish refugees to Miami. They were fleeing the Nazi Holocaust. They had already been turned away by Cuba.

Amidst a Red Wave of "nationalist" hate, American "conservatives" screamed that these people were poor, didn't speak English and would take away our precious resources.

So Franklin Roosevelt did not let them into the United States. The ship was sent back to Europe. Nearly every Jew on it perished in Hitler's concentration and death camps.

Throughout Germany, Poland and everywhere else Hitler spread his hate, fascists were marching into synagogues like the Tree of Life in Pittsburgh, gunning down Jews.

Today a caravan of desperate refugees is making its way from central America. They are fleeing a slaughterhouse of fascist murder and violence, as well as desperate poverty imposed by the relentless exploitation of imperial corporations.

The current occupant of the White House intends to use them as props in an "October Surprise" to whip up bigotry and hate. He's called this "the caravan election," and hopes it will help his party solidify his control over Congress and statehouses around the US. Such a disaster would result in the closest thing to a pure fascist state the US has experienced since virtual totalitarianism was imposed by Woodrow Wilson during and after World War I.

Trump has now deployed some 5,200 troops to our southern border. He's followed in Hitler's footsteps by cruelly separating hundreds of children from their families, locking them into concentration camps hidden from the public eye. The physical and psychological damage to those who survive is unspeakable and permanent.

The horror is all too predictable. Trump has a Jewish son-in-law, and his daughter has converted. He does not explicitly attack Jews (yet). But true meaning of his rhetoric about "globalists" and attacks on George Soros and other Jewish liberals is unmistakable.

Above all, Trump is an apostle of hate. His attacks Muslims, Hispanics, African-Americans and "others" comprise a traditional fascist assault on decency and democracy. The rhetoric and targets may be somewhat different, but the strategy and tactics are those of Hitler.

In such an atmosphere, it's no surprise the large and permanent pool of anti-semitism on the hateful right would puke up a murderer like the one in Pittsburgh. That Trump would dare show his face at a memorial for the victims is almost as unspeakable as the act itself. The only real question is when and where it will happen next.

Franklin Roosevelt lacked the courage and backbone to allow the Jewish refugees on the St. Louis into the United States. Their death is forever on his soul.

Donald Trump has now whipped up the whirlwind that has slaughtered still more Jews in Pittsburgh. He intends to use this "Red Wave" of bigotry and violence to solidify a fascist regime that can only lead to more slaughter.

Related Topic(s): Anti-semitism; Bigotry; Donald Trump; Holocaust; Pittsburgh; Pittsburgh Synagogue, Add Tags
Add to My Group(s)
Go To Commenting
The views expressed herein are the sole responsibility of the author and do not necessarily reflect those of this website or its editors.