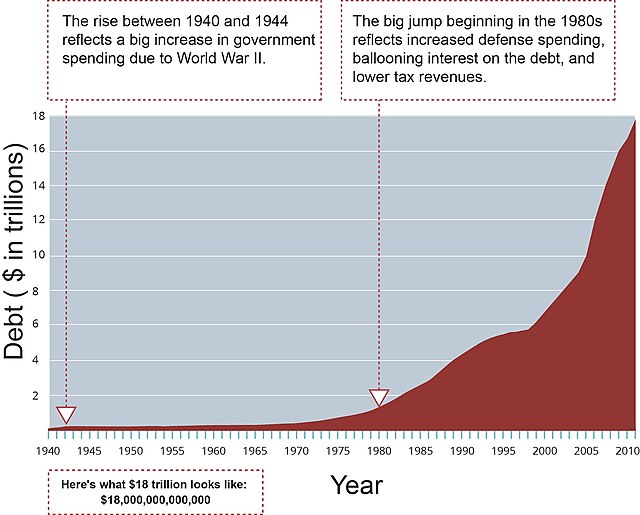 The Washington Post reports that US president Donald Trump and Senate Minority leader Chuck Schumer (D-NY) "have agreed to pursue a deal that would permanently remove the requirement that Congress repeatedly raise the debt ceiling."

That must be a bitter pill to swallow for those who thought they were electing an "anti-establishment" president to "drain the swamp" in Washington, but it should be no surprise. After all, Trump built his business career on going into debt up to his neck, taking a profit when things worked out, and leaving his partners holding the bankruptcy bag when they didn't.

The political establishment's way of handling the debt ceiling is for all of the allegedly competing sides to rattle sabers and threaten a fake "government shutdown" if they don't get their way. Then, before such a "shutdown" (or after a few days of one), the politicians get together to "responsibly" and "reluctantly" authorize a bigger line of credit for themselves, with you named as guarantor whether you like it or not.

In keeping with his authoritarian dislike of red tape that restricts government from doing anything it might take a notion to do, and in fine establishment style, Trump intends to do away with the theatrics. White House press secretary Sarah Huckabee Sanders characterizes the Trump/Schumer proposal as "a more permanent solution to the debt ceiling." By which she means that in the future, no one on Capitol Hill or at 1600 Pennsylvania Avenue will even bother to put on a burlesque of fiscal responsibility. Any time the credit card is about to max out, the limit will just go up automatically.

But of course it isn't quite that simple.

The politicians' debt (they call it the "national" debt in hopes that the rest of us will go along with the fiction that WE borrowed the money and are obligated to pay it back) will soon top $20 trillion. The entire US Gross Domestic Product for 2017, if seized and liquidated for the purpose of paying down that debt, would not quite completely pay it off.

That debt is never going to be repaid in full. In fact, the Trump/Schumer plan is an open statement of intent to never even begin paying it down. The politicians intend to keep on spending more than they take in and borrowing the difference until nobody's willing to loan money to them anymore.

The US national debt will, sooner or later, be defaulted on. That will damage the American economy badly. But the sooner it's done, the less the damage will be. If Trump was really an anti-establishment president, he'd veto any attempt to raise the debt ceiling, repudiate the existing debt, and demand a balanced budget from Congress.

Related Topic(s): National Debt; Schumer-Charles; Trump Presidency, Add Tags
Add to My Group(s)
Go To Commenting
The views expressed herein are the sole responsibility of the author and do not necessarily reflect those of this website or its editors.