Trump has been in trouble ever since the FBI began looking into possible ties between his campaign and Russian interests in the summer of 2016. We all know the gathering storm of evidence of cooperation or attempted cooperation between the Campaign and Russian interests. (Other crimes, like money-laundering and obstruction of justice could be on his legal agenda as well.) That evidence was first revealed to the FBI by George Papadouplos. Of course, Carter Page, the sometime Trump campaign staffer, had been under FBI surveillance off and on since 2013 because of suspicion that the Russians were trying, off and on, the recruit him as some kind of asset.

Then there is the variety of indictments/guilty pleas, with the constant references in the media to the "cooperation" being offered by those who plead guilty, to the Mueller investigation. The one big fish who has been indicted but has not pled guilty as yet is of course Paul Manafort. However, recently, in an action that has not gained too much media attention, a former Manafort son-in-law who was active with him when he was helping to promote Russian interests in Ukraine before the "Nuland Coup," has pled guilty and is "cooperating." (Let's just hope that there were no children of that former union. This would be very tough for them: Dad vs. Grandpa and [presumably] Mom.) So, there's an increasing amount of "legal stuff" going on. 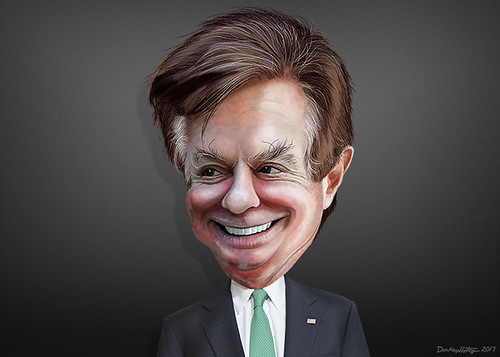 Paul Manafort - How many years can you take, Paul?
(Image by DonkeyHotey)   Details   DMCA

Then there's the increasing number of revelations on various meetings that various Turmpites held with representatives of various foreign nations. Certainly, if anything of political value for the Trump Campaign was gained from these meetings, either financial or substantive, that would be illegal. But even if nothing substantive came of the various meetings, and Trump Jr. tells us over-and-over again that nothing did, just meeting to inquire about possible benefits may be illegal. Of course, one cannot count on Trump Jr. as a reliable recollector of what actually happened at any of them. At one Senate Intelligence Committee meeting he was reported to have said "I can't remember" 116 times. (And he's a good businessman?)

Then of course there is the whole Mike Cohen episode. Apparently, a court-appointed Special Master is still plowing her way through the tons of documents and other material collected, by warrant, from Cohen's office, and will determine what is and what is not covered by attorney-client privilege (ACP). Some of it will be, but some of it won't. There might be "stuff" on Trump directly that is not covered by ACP. But then there likely are a whole bunch of Cohen business and political records that are not so covered, which could make for really big trouble for Cohen. And to get out of it, Cohen might turn on Trump, particularly given the way that Trump has treated him since the election. (Yes, it would seem that both Trump and Cohen are so much into personality and ego, which could have major negative consequences for both of them.) And now, Cohen has to deal with a former taxi-business partner who has pled guilty and "is cooperating." And then, further related to Cohen, there is the whole "Stormy Daniel thing." If the attorney Michael Avenatti can force Trump into discovery on the case, that opens up another whole can of worms for Trump. 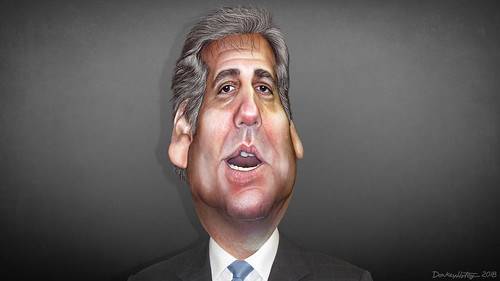 And how many for you, Mike?
(Image by DonkeyHotey)   Details   DMCA

BUT, much of this stuff has been going on for quite some time. Trump has been a consistent Roy Cohn/Lee Atwater "Always attack; Never defend" acolyte for as long as he has known about the "Russia investigation," going back to Jim Comey's days at the FBI (and of course on national television he told Lester Holt that "Russia" was the reason he fired Comey). But what has happened in the last couple of weeks has moved the Trump offensive to a whole different level. First, in a move that reeks of fascism, Congressman Nunes has added to the legislative role assigned to the Congress a distinctly political role acting in close collaboration with the President and his particular politico/legal issues. 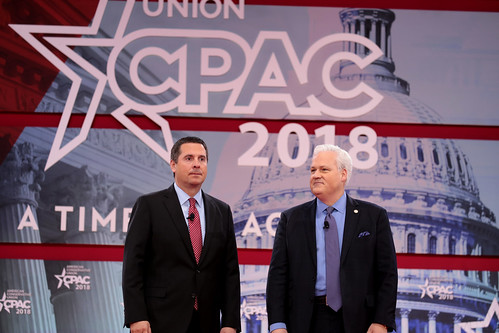 Then, Trump replaced all of the experienced defense attorneys (that is the ones in Washington legal circles that he could get to come on board with him) with a pit bull/attack dog who hasn't practiced law in decades. That of course would be Rudy Giuliani. (Trump was able to retain one new experienced lawyer. It just happens that one of his specialties is impeachment defense. So. You don't think that Trump is worried?) Giuliani's understanding of the law and legal practice seems to have come down to one of the oldest legal maxims in the book: "When you don't have the law, argue the facts; when you don't have the facts, argue the law; and when you have neither the facts not the law, argue ad hominem." Another version of the third clause is "yell and scream a lot." Rudy seems to be good at both. And of course, along with the Trump Minister of Propaganda, Sean Hannity, and all of his own acolytes at Trump TV (as MSNBC's Chris Hayes likes to call it) and elsewhere in the Right-O-sphere, the attack on the FBI, the Justice Department, and the Mueller investigation (although not on Mueller himself, yet). 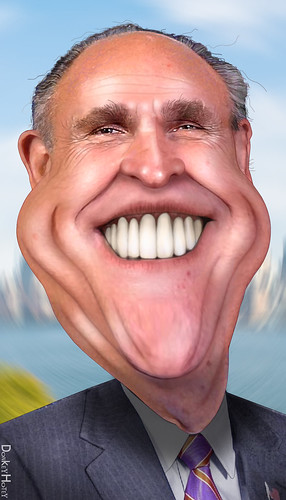 Even those teeth aren't going to cut it for you in court, Rudy.
(Image by DonkeyHotey)   Details   DMCA

So, why after all of these months, and the accumulating potential crimes-load, this sudden, heated, counter-offensive? I think that the answer is fairly straight-forward. At the beginning of his campaign, Trump was his own, odd, reality-TV personality with a pitch based on racism, xenophobia, and Islamophobia. He was also a very good bully and empty promise-maker (which he would not have had the foggiest idea on how to keep them, even if he had wanted to). However, he did not attract any traditional Republican ruling class support until the Mercers, with Steve Bannon and Kelly -Anne Conway, came over from the Cruz Campaign in the summer of 2016.

And then, further (and I am not telling you something you don't already know), since he became President, and it became quickly apparent with his cabinet choices, that he was not "going to drain the swamp" but was going to go full-on economically-dominant-sector-of-the-ruling-class mode. There were two primary objectives that that ruling class sector had in the 2016 election: huge tax cuts for the rich and the large corporations and what Steve Bannon calls the "deconstruction of the administrative state." The latter includes massive deregulation plus the hollowing out of the professional class that runs the myriads functions of the Federal government.

Both have been accomplished, in spades. Trump is no longer necessary, nor is he useful. He may be in serious legal trouble, but he is definitely a Full Functional Liability, as well as a Major Embarrassment, to the many in the party and many in the ruling class themselves. Few have said it yet. But the trend has started. Rex Tillerson (can't be more Ruling Class than he) gave a commencement address at the Virginia Military Institute of all places in which he spoke volumes about the necessity of telling the truth, of eschewing "alternative realities," and the importance of ethics and morality in government.

Mike Pence, after spending all of his time until very recently getting as close to Trump as he could without sharing the same suit, all of a sudden is setting up his own political operation. He, a Dominionist himself, is the candidate of the Christian Right wing of the Republican Party, and the ruling class sector it represents. And then there is Sen. Richard Burr, a right-winger from North Carolina, issuing a report from the Senate Intelligence Committee which he chairs that states clearly that the Russia interfered in the 2016 election with the intent of helping Trump win. 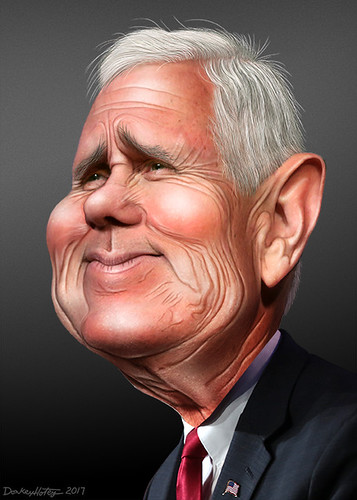 Nothing can hide your Dominionism, Mike, not even your silly smile.
(Image by DonkeyHotey)   Details   DMCA

Steven Jonas, MD, MPH, MS is a Professor Emeritus of Preventive Medicine at StonyBrookMedicine (NY) and author/co-author/editor/co-editor of over 35 books. In addition to his position on OpEdNews as a "Trusted Author," he is a Senior Editor, (more...)
Related Topic(s): Giuliani Rudy; Investigation; Islamophobia; Propaganda; Republican; Trump And Putin; Trump Bully In Chief; Trump Foreign Policy; Trump Idiot-in-chief; Trump Illegality; (more...) Trump Lawyers; Trumpism; Xenophobia, Add Tags  (less...)
Add to My Group(s)
Go To Commenting
The views expressed herein are the sole responsibility of the author and do not necessarily reflect those of this website or its editors.