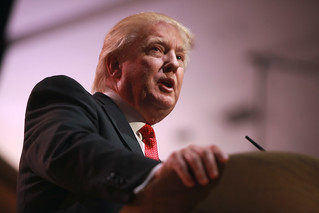 In interviews Sunday on two television networks, the presumptive Republican presidential nominee Donald Trump rejected calls for an increase in the federal minimum wage and suggested that the federal standard should be scrapped.

Trump was questioned on the subject on the NBC program "Meet the Press" and on ABC's "This Week" and gave similar responses. NBC interviewer Chuck Todd reminded him of his statement during a Republican debate that the federal minimum wage should not be increased. This was the same debate in which Trump said flatly, "Wages are too high," and would have to be lowered to make American companies competitive.

Trump tried to combine verbal expressions of sympathy with the plight of low-paid workers with the rejection of any federal action to improve their living standards. "I don't know how people make it on $7.25 an hour," he began. "Now, with that being said, I would like to see an increase of some magnitude. But I'd rather leave it to the states. Let the states decide. Because don't forget, the states have to compete with each other."

Todd pressed him, asking, "Should the federal government set a floor, and then you let the states..." Trump interrupted, "No, I'd rather have the states go out and do what they have to do."

On ABC, interviewer George Stephanopoulos raised the same issue, pointing out that on the minimum wage, "all through the primaries, you were against an increase. Now you're saying you're looking at it. So what's your bottom line on this?"

Trump replied, "Well, I am looking at it and I haven't decided in terms of numbers. But I think people have to get more." Then he changed the subject, claiming that his economic policies would raise wages overall to much more than the $15 an hour minimum proposed by Democratic presidential candidate Bernie Sanders and reluctantly endorsed, with numerous qualifications, by Democratic frontrunner Hillary Clinton.

Trump's call for the elimination of the federal minimum wage is a reactionary proposal and an attack on the living standards of the working class. It provides an indication, behind his pseudo-populist rhetoric, of the brutal assault on what remains of legal protections for workers that would be a centerpiece of a Trump administration. Posing as a friend of the coal miners in West Virginia last week, he called for the elimination of regulations on the coal companies, i.e., the gutting of health and safety rules as well as environmental restraints.

The federal minimum wage was established in 1938 as one of many social and labor reforms enacted under the New Deal administration of Democratic President Franklin Roosevelt. It was vociferously opposed by business interests, and every proposed increase over the past 78 years has been denounced by corporate lobbyists as a "job-killing" interference with the free market.

The federal minimum wage reached its highest level, in terms of 2013 dollars, in 1968, when it was the equivalent of nearly $11 an hour, and it plateaued at the equivalent of $9 an hour through the 1970s before plunging to the equivalent of $6 an hour at the end of the 1980s under conditions of Republican President Ronald Reagan's opposition to any increase.

Since then, the infrequent increases in the federal minimum wage have served only to offset rising prices. The last increase, to $7.25 an hour, came in 2009, and any subsequent increases have been blocked by Republican intransigence and Democratic indifference.

Trump's language on the minimum wage may seem confused and contradictory, but there is no question that this is an issue with which the real estate and casino mogul is intimately familiar. Many of his business enterprises employ low-wage labor, particularly in cleaning, security and other less-skilled positions at hotels, casinos and restaurants.

In suggesting that the federal minimum wage be dispensed with, and that the power to set a floor on wages be left to the states, which he pointed out "have to compete with each other," Trump is advocating a race to the bottom, in which governors and legislatures would offer minimum wage reductions and exemptions, just as they offer tax concessions, to entice companies to locate in their states.

This gives a glimpse of the savage right-wing policies that a Trump administration would institute, behind the billionaire's demagogy about restoring the jobs of coal miners, steel workers and other manufacturing workers.

It is also notable that while seeking to disguise his right-wing proposal on the minimum wage with clouds of words, Trump was far more specific in his pledges to Wall Street on taxes and the national debt.

Patrick Martin writes for the World Socialist Website (wsws.org), a forum for socialist ideas & analysis & published by the International Committee of the Fourth International (ICFI).
Related Topic(s): Corporations; Minimum Wage; Wages-Salaries, Add Tags
Add to My Group(s)
Go To Commenting
The views expressed herein are the sole responsibility of the author and do not necessarily reflect those of this website or its editors.