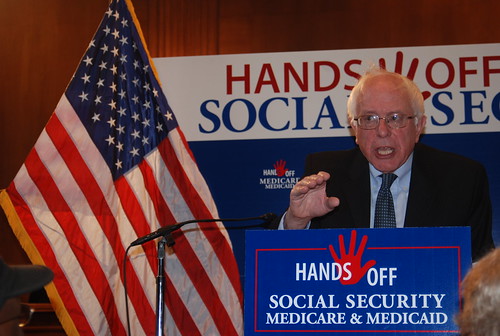 Watch out! Uncle Donald is coming for your and all your relatives' Social Security and your Medicare!

The all-out attack on Social Security and Medicare, those two remaining standing edifices of the legacy of Franklin Roosevelt's New Deal and Lyndon Johnson's New Society, has begun in earnest with President Trump's latest executive order calling for the postponement, until year's end, of the payroll taxes by employees and employers that finance those critically important social programs.

Unfortunately, many Americans have no idea what the FICA (Federal Insurance Contributions Act) tax taken out of each paycheck actually is. They just look at their pay stub and see that the total earned for two weeks' or a month's work was reduced by 6.2 percent. They may understand that the second, smaller deduction of 1.45% goes to pay for Medicare, but since if they are not yet 65, and aren't receiving Medicare health care benefits, they may not realize how important that deduction is.

Also unfortunate is that nowhere on their pay stub is it explained that one's employer also paid an equal 6.2% FICA tax and 1.45% Medicare tax for each employee into those two federal trust funds.

In other words, like an old fashioned "defined benefit" pension or like most employer-sponsored 401K plans, every time an American worker has the FICA and Medicare tax deducted from a paycheck, the employer is required by law to match that amount as a "contribution" to those critically important funds that will pay for the worker's retirement benefits and post-65 health care costs. Those two programs, of course, are also available to support workers who, for whatever reason, become disabled and cannot work, even before they reach age 62 (for Social Security) or 65 (for Medicare).

Since 63 million, or one-in-six of all Americans, receive benefits from Social Security (for one-in-five of those recipients who are married, and nearly half of those who live alone, that benefit covers at least 90% of their living expenses), and since 18% or close to one-in-five of all Americans, have their health care covered by Medicare, ending funding for these two programs would be catastrophic - especially for the nation's elderly. It would also be catastrophic for those families with children who lost a working spouse, or for those non-working spouses, typically older women, who lose a working spouse and survive on the spouse's Social Security benefit.

Social Security and Medicare are not just threads but are two central supporting cables orf the tattered "social safety net" in this dysfunctional American social system. Without them we will be living entirely in a Dickensian world of survival of the fittest, the elderly and disabled deprived of access to health care, as well as of funds for basic needs like food, rent, heat, electricity, a phone and transportation.

The irony here, which the mainstream corporate media are wholly missing or blotting out of their coverage of Trump's latest executive order power-grab atrocity, is that in postponing or cancelling employee and employer FICA and Medicare payroll taxes, in the name of "stimulating" the economy, the only ones getting more money to spend will be those workers who are still employed and receiving a paycheck (people, in other words, who don't need a bonus, because they're still working) and their employers (who, if they're still employing their workers, don't need the extra money either). The people who need the stimulus money are the 30 million or more workers who have lost their jobs, and the 30 million more who didn't have one even before the pandemic hit because of the uneven "recovery" of the economy from the last recession.

It's the unemployed who need financial support and access to health care in this pandemic-induced depression, not the still employed! Talk about a "Doh!" moment!

Democrats, if they had even the flexible cartilaginous spines of a shark or ray, should decry this unconstitutional attack on Social Security and Medicare, calling what it is - an impeachable usurpation of Constitutional taxing authority - and should begin investigating it in the House immediately. (So far, House Speaker Nancy Pelosi's most angry response was a quote from a Republican Senator, Ben Sasse of Nebraska!)

Presumptive Democratic Presidential Nominee Joe Biden should be declaring his absolute support for the preservation and indeed improvement and expansion of both programs: Social Security and Medicare. The former, since its founding, was never intended to serve as the sole support of retired workers, who were expected to also be receiving pensions from their employers, while the latter, Medicare, was established in 1965 at a time when health care was considerable cheaper in real dollars and has been chipped away at and increasingly privatized by its enemies in both parties to where people today on Medicare spend more on their health care as a percentage of income that their forebears were paying before the program was founded. Both need to be reworked and better funded to meet today's needs, but in the meantime that support that is provided cannot be cut!

Unfortunately Biden, throughout his entire political career as a politician from the corporate state of Delaware, has been part of a bi-partisan cabal of politicians who have sought to undermine Social Security and Medicare, labeling them derisively "entitlements" and trying to either privatize the programs or make them need-based - in effect turning them from a universal benefit into a massive welfare programs. That, or course, is the surest way to ensure both program's rapid demise.

Perhaps in his senescence Biden will channel the better angels of both FDR and LBJ and will, during whatever campaigning he does from his basement in the last 12 weeks before the Nov. 3 election, and going forward should he defeat Trump and become the next president, and will make shoring up and expanding Social Security, and making expanded and improved Medicare-for-All a reality.

Related Topic(s): Attack On Entitlements; Social Safety Net; Social Security Funded; Trump Tax-cut Scam, Add Tags
Add to My Group(s)
Go To Commenting
The views expressed herein are the sole responsibility of the author and do not necessarily reflect those of this website or its editors.