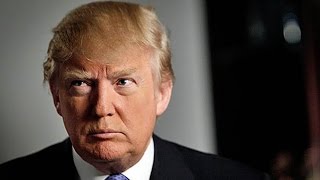 Donald Trump is clear on one thing: any bad news, is fake news.
(Image by YouTube, Channel: The Young Turks)   Details   DMCA

It is impossible to know for certain what happened in the United States presidential election of 2016. Donald Trump, the unlikely winner, won by a clear margin. His victory was guaranteed when he was able to defeat his Democratic Party rival, Hillary Clinton, in a handful of States in the Midwest. Trump won in each of the battleground States -- Florida, Iowa, Michigan, North Carolina, Ohio, Pennsylvania and Wisconsin. The margins were not always large, but he won nonetheless. Opinion polls had not shown this to be the case and most political pundits did not expect Trump to win. Indeed, there was even talk that Hillary Clinton would win States such as Utah -- guaranteed to vote Republican -- but this was not to be; Trump took Utah by a decent margin. Most of the experienced political operatives and journalists felt that Hillary Clinton might even win by a landslide. As it turned out, she won three million votes more than Trump, but by the peculiar logic of the U.S. election system, Trump won by 304 electoral college votes to Hillary Clinton's 227.

A year and a half later, the U.S. public is still wondering how Trump won. Disbelief is the dominant mood among Democratic Party voters and those who have come to dislike Trump. How is it possible for this man, they say, to have won the election? One cannot say the turnout was low, for more people voted in the highly contentious election in 2016 than they did to re-elect Barack Obama in 2012. It is true that the margin of victory in 12 of the most important States was very narrow. In four States -- Michigan, New Hampshire, Pennsylvania and Wisconsin -- Trump won by less than a 1 percent margin and took 46 electoral college votes from Hillary Clinton. In two other States, Florida and New Hampshire, with 20 additional electoral college votes, Trump won by a margin of just over 1 percent. This was a very tight contest. Hillary Clinton might well have won the election if the margins had gone in her favor. As it turned out, Trump won.

There are many conventional reasons why Hillary Clinton was not able to defeat Trump -- the 2013 withdrawal of the Voting Rights Act (VRA), the old traditions of misogyny, and a very poor campaign run by the Democratic Party.

The 2016 presidential election was the first one since 1965 where non-white voters were not under the protection of the VRA. The VRA was used effectively against a long history of anti-democratic means employed to suppress the Black, Asian, Native America and Latino vote. Just after the election, the Election Protection Coalition reported that it had logged 35,000 complaints for voter intimidation, changes of voting sites without notice and long lines. This was the tip of the iceberg. Clever use of voter identification policies and creating difficulties for those without cars to vote meant the disenfranchisement of certain parts of the population. The summer before the 2016 election, an appeals court ruled that the North Carolina legislator's bid to create a voter identification system would "target African-Americans with almost surgical precision." This is precisely what happened across the U.S. Sections of faithful voters for the Democratic Party found it impossible to vote. When the margins are as tight as they were, this form of voter suppression can be very valuable.

Hillary Clinton was the first woman to run on a major party ticket for the U.S. presidency. This was the 58th presidential election and yet, none of the two main parties had ever nominated a woman to run for President. The Communists and the Green Party had done so, but they have not been in a position to win the election. Hillary Clinton knew well the immense challenge it posed for her. She did an admirable job of trying to balance the sexist expectations for the presidency and the fact of her being a woman.

A study conducted during the election campaign found that those who believed that U.S. society was becoming "too soft and feminine" were four times likely to hold an unfavorable view of Hillary Clinton. These were the same people who salivated over the prospect of a Trump presidency. Misogyny, or hatred of women, is a general social phenomenon. In October 2017, a year after the election, Hillary Clinton told CNN that sexism played a role in her loss of the presidency. Donald Trump, she said, is "Exhibit A of what we're up against" in terms of the high "level of sexism" in U.S. society. There is, Hillary Clinton pointed out, "a backlash against women speaking out. I think sexism and misogyny are endemic in our society," she said forcefully.

Errors are inevitable in any electoral contest. It is impossible to forecast the way things will go and how small gestures can be magnified. Obama had captured the public imagination in the U.S., but more than anything else, he had fired up the actual base of the Democratic Party, a base of African Americans, Latinos, Native Americans, Asian Americans and the labor movement. His choice of Joe Biden as his Vice President was clever: Biden, who comes from the battleground region of western Pennsylvania, found it easy to reach out to the voters who would later abandon the Democratic Party for Trump.

Hillary Clinton chose as her running mate a white man with little charisma and no ability to reach the impoverished and other disadvantaged sections. Hillary Clinton did not campaign as vigorously as she should have in these marginal areas, nor did her party let loose their surrogates to inspire those who lived in broken communities. She was too closely associated with the presidency of her husband, Bill Clinton, whose policies had set in motion the globalization policies that wiped out jobs in these battleground States. For instance, Wisconsin, once a Democratic and labor stronghold, is now an unlikely bastion of the Far Right. This was the unfortunate inheritance that Hillary Clinton had to carry. It is also the case that she was not temperamentally able to pivot Leftwards and provide a manifesto against the policies that have increased inequality and suffering.

If you read Hillary Clinton's memoir, What Happened (2017), you will find gestures towards all these reasons why she was not able to win. It is a long book, a book of sorrows and anger. The longest section is not given over to the racist decision by the U.S. Supreme Court or to the deep core of misogyny that structures U.S. society. The longest section is reserved for Russia. "I never imagined that he would have the audacity to launch a massive covert attack against our own democracy, right under our noses -- and that he'd get away with it," Hillary Clinton wrote. The "he" is not Trump but Russian President Vladimir Putin.

U.S. political debate is now structured around the phrase "Russian interference in the U.S. election." Investigations are ongoing, with the most significant of them all being conducted by Robert Mueller, former head of the Federal Bureau of Investigation (FBI). Mueller has not said how long he will take, but small leaks from his office indicate that he has built up an enormous case that reveals some level of interference by the Russian state. Mueller has a great many indictments that have led to arrests but nothing yet on Trump's involvement. One member of the team indicates that there is not enough that leads directly to Trump. But there is evidence of conversations between Trump's team and various Russians. The arrest of the Russian student Maria Butina and the indictment of 12 Russian officials of the GRU, the Russian intelligence agency, have raised eyebrows. The investigation suggests that the Russians created a troll farm to influence voters on social media. But, again, much of the public record is circumstantial and inconclusive.

In mid July, the U.S. Justice Department announced a new policy to alert the population about foreign cyber operations. Its Cyber-Digital Task Force, set up in February, released a report that laid the outlines of the new policy. But even here, the department cautioned, it would be necessary to be careful not to reveal sources. There has been no comparable report on racist voter suppression or misogyny. In fact, there is no discussion about these issues at all.

Related Topic(s): 2016 Election; Russian Hacking; Russian Propaganda; Trump Cruelty, Add Tags
Add to My Group(s)
Go To Commenting
The views expressed herein are the sole responsibility of the author and do not necessarily reflect those of this website or its editors.