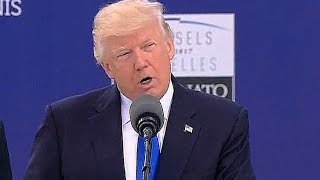 Donald Trump has leapt across the Atlantic Ocean to bring America's European allies to heel. Or so his Twitter account suggests. In London, an orange effigy will fly above the city in welcome. Massive crowds will gather on Friday to greet him with jeers and boos. Trump has the ability to translate dissent into praise. He will see the crowds and preen. Surely, he is the most important American to set foot in the British Isles.

He will walk through the streets of Brussels, pretending to attack America's NATO allies. He will wink to his base -- telling them that he is being tough on everyone, not just China, but also Germany and France. His base will think that he is their champion, speaking for them in a voice that has not been heard before.

Others will be hoodwinked into the belief that Trump -- yes, Trump alone -- is somehow changing the terms of the great Atlantic relationship.

But this is all bunk. Trump is a deception. There is no change afoot. The United States will continue to fund European "defense," which is more accurately characterized as the U.S.-driven attempt to dominate Eurasia (Russia and China). The United States will continue to use NATO as much as possible to drive the agenda of Western-led imperialism. All this, the facts of the matter, will be set aside as the liberals cry out in horror about Trump's political infidelities. How dare The Donald poke a finger in the "special relationship" with the other colonizers, they say! They are outraged. The colonizers must stay together.

Trump travels with his bludgeon -- his Twitter account. He warned before he left for Europe that the Europeans must lift their military spending. This comes before the NATO summit, where Trump is expected to be as testy as he was in the Group of Seven (G7) summit in Canada. Then, Trump provoked a war of words with Canadian Prime Minister Justin Trudeau. Now, he seems to want to get into a war of words with all of Europe.

The Europeans (and the American establishment liberals) fear that Trump will break the Atlantic alliance -- the linkage between Western Europe (substantially) and the United States. Old colonial ties and ties reaffirmed through the Group of Seven (G7) process brought the United States into a very tight embrace with France, Germany and the United Kingdom. Much was made during the Bush years of the New Europe (namely, Eastern Europe), but this was not serious. The real Atlantic alliance is between the U.S. (with Canada) and these three major European powers.

It is to this that European Council President Donald Tusk gestured when he said, "Dear America, appreciate your allies. After all, you don't have that many." This was a bitter statement. It comes from a former Prime Minister of Poland, who is now disliked in his own country. Tusk has thrown his fortunes into the European project. He worries on behalf of Berlin, London and Paris.

Donald Trump responded lightly. "We have many allies," he said, brushing off the other Donald's warning.

The United States -- before Trump -- and NATO itself had made low military spending in Europe an issue. It was NATO that agreed to the 2 percent of GDP threshold, arguing that each of the NATO member-states must lift their military spending to above 2 percent of GDP. The majority of European countries in NATO -- 24 of 28 -- spend well below that threshold. They have no real plans to lift their military obligations.

The 2 percent threshold provides Trump a Twitter-worthy argument. He knows that the U.S. is the largest spender on the military on the planet, and he knows that U.S. allies such as the European states, but also Japan and South Korea, have relied upon the U.S. military umbrella to protect them from threats. The United States spends close to 40 percent of all military spending on the planet. No country in Europe spends near U.S. levels. The United States and the European Union have a comparable GDP. The U.S. spends over 3 percent of its GDP on the military, whereas the European Union spends half that amount.

Related Topic(s): Allies; Military; Money; NATO; Trump Dangerous, Add Tags
Add to My Group(s)
Go To Commenting
The views expressed herein are the sole responsibility of the author and do not necessarily reflect those of this website or its editors.