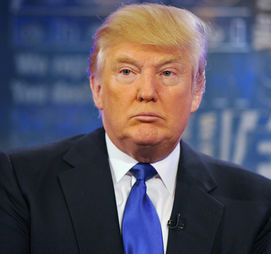 The new excuse for the U.S. mainstream media to violate its professional principles of objectivity and balance in covering this presidential race is that it's all Donald Trump's fault, or as The New York Times put it, "Trump Is Testing the Norms of Objectivity in Journalism."

But that is just the latest dodge for American journalists who don't really believe in the principle of evenhandedness. Many have been slanting their coverage for as long as I can remember in my nearly four decades covering news in Washington.

Indeed, bias and outright dishonesty have long been the norm for major American news outlets, especially in the fabrication of foreign monsters around the world for the U.S. military to seek out and destroy.

The truth is that at virtually every spin of America's revolving wheel of "enemies," The New York Times could write a similar headline blaming the foreign leaders, just as the newspaper did Trump: "Putin Tests the Norms of Objectivity in Journalism" or Bashar al-Assad or Saddam Hussein or any other designated villain du jour.

In the Times' framing of the problem, it's not the journalists who have a responsibility to maintain "the norms of objectivity"; it is Trump or some foreign villain who "tests" the norms. The journalists are the victims here, with their high standards being put under unfair pressure.

But I can't remember a time when major U.S. news outlets approached a foreign policy issue with anything approaching objectivity or balance. With very few exceptions, the pattern is to fall in line behind the U.S. foreign policy establishment's propaganda.

Indeed, when some of us have tried to apply objective or even-handed standards to foreign controversies, we faced resistance and punishment from our own news organizations. We learned that very few senior editors would challenge even the most blatant nonsense from the State Department or the White House. After all, that's how they got to be senior editors.

Whether it was Nicaragua's Sandinistas in the 1980s, or Iraq and Serbia in the 1990s, or Iraq (again) and Iran in the 2000s, or Syria, Russia, China and Iran (again) today, U.S. "star reporters" shucked aside even the pretense of fairness in favor of careerism. The more you pile on these "enemies" the better for you.

Along with these longer-term "enemies," there are short-term "villains" who are transformed into cartoon characters almost overnight, such as Ukraine's President Viktor Yanukovych. Though elected by the voters, he was made into a "black hat" in 2013 and 2014 because he wouldn't go along with an economic deal with Europe that involved harsh "reforms" from the International Monetary Fund.

Yanukovych also was considered an ally of neighboring Russia, so he got the full propaganda treatment from U.S. government agencies and their client "journalism" outfits, such as the U.S. AID-funded Organized Crime and Corruption Reporting Project. Those anti-Yanukovych themes, in turn, were picked up and amplified by mainstream U.S. media outlets, including The New York Times and The Washington Post.

So, on Feb. 22, 2014, when Ukraine's elected president was violently overthrown in a putsch spearheaded by neo-Nazis and other ultra-nationalist street fighters, the West's media almost universally cheered the coup as a victory for "democracy."

Of course, the abandonment of "objectivity" and honesty is not a new story in American journalism. In reality, there has long been a self-serving suspension of self-awareness on the part of U.S. media figures who still view themselves through the heroic but now foggy and yellowed prism of the Pentagon Papers and Watergate.

Related Topic(s): Biased News Coverage; Government; Media; Media Failure; Media New York Times; Orwellian, Add Tags
Add to My Group(s)
Go To Commenting
The views expressed herein are the sole responsibility of the author and do not necessarily reflect those of this website or its editors.