Author's Note: Back in 2007, I published a column on the original BuzzFlash entitled "SS Guards at Play ." At the request of my dear friend Mark Karlin, editor and publisher of BuzzFlash, I revisited that column, with some new perspectives added.

At the United States Holocaust Memorial Museum in Washington, DC is an extensive collection of photos from the Nazi extermination camp at Auschwitz. The photos show these extermination camp guards "on break," in 1944 at the height of the camp's mass murdering campaign, having picnic lunches, engaging in choral singing, playing with their dogs, gathering for smiling group photos, and smoking cigarettes. (This was so even though at Hitler's behest in the 1930's, the Nazis had instituted the world's first comprehensive anti-smoking campaign, in Germany. And there you thought that all German armed forces members always followed orders.) They even decorated Christmas trees (after all, the slogan "Gott mit Uns" was on their belt buckles). And all this time, thousands of Jews and other nationalities were being gassed and burned at the camp every day. Talk about the banality of evil. 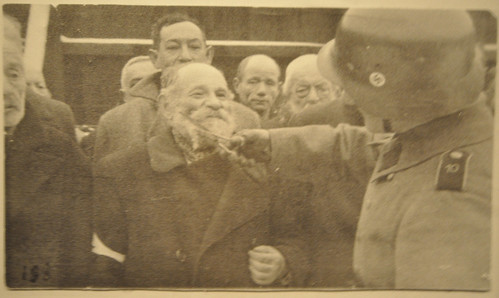 Among the reactions to the contents of the exhibit was expressed by The New York Times columnist Roger Cohen ("Down Time from Murder," NYT, 9-24-07): how could those Germans go about their daily lives and laugh on breaks and retreats? Oh those "just awful" Germans. "How unique they were." Oh really?

Funny, but I was reminded of the set of photographs taken over many decades, some of which were actually made into picture postcards sent through the US mails, of public lynchings in the U.S. South. (You can see an extensive collection of them here.) People, other than the victims, laughing, smiling, kids playing , (no link necessary for this one) having lunch, and acting as if a lynching was a celebratory spectacle. How could that happen? And how indeed, only the Germans did that later on during the Holocaust. And then I also thought of those smiling photos of the guards at Abu Ghraib, Iraq. Just ordinary folks, having fun while brutalizing Iraqi prisoners. And then, we have the reports of the for-fun shootings of Iraqi civilians by Blackwater mercenaries in Iraq and the ongoing horror of Guantanamo. 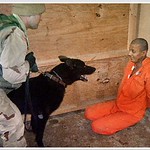 Interrogation Procedure 1. This must have been fun too.
(Image by adilbookz)   Details   DMCA

So, is it just us and the Germans who goes about our business while horrors are committed in our name? Well, no. It is any nationality that is fed the line that certain people who look just like humans, actually aren't. For the Germans, the Jews the Romanos and the Slavs were subhuman. For the Turks, it was the Armenians.. For the American South it was (and unfortunately in a variety of parts of our country it still is) that Blacks were subhuman. For Trump, it is brown people trying to save their lives by coming to the US. For certain members of our Armed Forces, there was a message delivered to them somehow, that somehow their Iraqi prisoners were subhuman. Humans don't do to other humans what the particular members of our species recorded in all of these photos did. Those deeds are done only to "sub-humans."

But it couldn't happen here again, could it? Nah. Couldn't possibly. We're just too advanced. No one could get away with labeling all of their political opponents as "traitors," as "Godless," as "just not like us," as "not Christian and thus not qualified to govern" (and yes, none other than "the maverick" John McCain said that in so many words back in 2007 (The Progress Report, "Blackout and Brownout," Oct. 1, 2007), and thus quite possibly somehow less than human. Couldn't happen here, could it. Could it? Just look at Trump, and the answer is yes.

But back to lynching, which was an execution, by mob action, without due process of law. It was carried out primarily in the South, both before and after the Civil War, most often (but not always) against African Americans. Lynching was condonded throughout the slave-holding South, of course during the Confederacy, and then onward from the middle of Reconstruction (1865-77) through the Jim Crow Era. Although its use came to an end around 1968, following the passage of the Civil Rights Act,

Steven Jonas, MD, MPH, MS is a Professor Emeritus of Preventive Medicine at StonyBrookMedicine (NY) and author/co-author/editor/co-editor of over 35 books. In addition to his position on OpEdNews as a "Trusted Author," he is a Senior Editor, (more...)
Related Topic(s): Holocaust; Impeachment; Lynching; Nazis; Racism; Trump; Trump Against Democracy; Trump Anger; Trump Attacks Impeachment; Trump Bigotry; (more...) Trump Campaign Speech; Trump Fake News; Trump Idiot-in-chief; Trump Impeachment, Add Tags  (less...)
Add to My Group(s)
Go To Commenting
The views expressed herein are the sole responsibility of the author and do not necessarily reflect those of this website or its editors.