Trump: The Lesser Of Two Evils

It may be difficult, as of today, to understand that Trump, compared to Hillary Clinton, is the lesser evil, but the argument that he is less dangerous than Clinton is strong for the following reasons:

Trump is a huge embarrassment for the country on the world stage, but particularly so for the Republican hierarchy, for if he were allowed to conduct himself in the White House as he has in the past, he would become the "face" of the GOP with every asinine comment and with every foolish move he threatens to make. Trump would remain high profile in the public eye, because he is the kind of repulsive/comical phenomenon that makes for popular "news" in our system where network bottom lines rule. Pundits and news readers would have a blast. Accordingly, he could set the Party back for a generation. While Trump might be free to run roughshod in the environment of the business world and bask there in his image as a gutsy, shoot-from-the-hip gunslinger, the GOP hierarchy, acting in its own self interest, would have every reason to do all in its considerable power to control his conduct when he represents the Party, and the Party would be able to do that. There is no way the Party would allow him to become the fascist dictator so many seem to fear.

On the other hand, nobody has more control of the machinery of the Democratic Party than the Clintons. Given the depth of their connections there is no force anywhere to restrain Hillary and her "first man" husband, once in office. The Clinton team, "Billary", has amassed an unprecedented level of political and financial power not only in the US but also in countries all over the world with their foundation, the Clinton Global Initiative. They carefully manage its image as philanthropic, although there are numerous indicators that they are selling influence.

NAFTA, advanced by Bill Clinton in the nineties, was the kickoff for other corporate-generated trade deals of which is TPP is just the latest. The Clintons as a couple were, and remain, the very faces of neoliberal globalism, and it would be naive to think that she would, once in office, use her authority to undermine a globalist "free trade" philosophy, even if forced during her campaign to yield to a Party Platform plank against TPP. For one thing, she would not feel constrained by such a plank. Moreover, there are certainly other such deals in the hopper that could arise, even if TPP falls. We in the US have short memories.

It was the Clintons during Bill's Administration that killed the protection of Glass-Steagall, thus removing the wall between commercial banks and investment banks and turning Wall Street into a Wild West of convoluted, fraudulent schemes, this leading to a financial collapse that put millions of citizens literally on the curb. The Clintons have taken many millions of dollars in speaking fees from the very power centers she claims now to be willing to "break up". Yeah, sure. That has to have the likes of Lloyd Blankfein and fellow Wall Streeters laughing out loud. "Who pays the piper calls the tune" is as true to today as it was in Aesop's time.

But it is the military issue that most sets Clinton apart from Trump, a fact that is receiving much too little attention. Clinton is very close to the centers of military interests, and during her tenure as Secretary of State we have built up military installations in the Baltic, right up against Russia's border, and have sent a warship into the Black Sea, where Russia has coastline. How does an intelligent US citizen think that Russians would interpret such actions? We have an entire naval fleet in the South China Sea. How can the Chinese fail to interpret that just as we would should we find a fleet of Chinese warships patrolling our West Coast?

Then there's the delicate subject of Israel. Anyone honestly searching for reasons for the hatred of the Arab/Muslim world toward the US is hit smack upside the head with the fact that the creation of the state of Israel, which rose from the ethnic cleansing of native inhabitants, and continues to this day by barbaric occupation, was accomplished through US influence. The whole world (save, apparently, ill-informed Americans) understands this continuing history of "Isramerica" and the degree to which it is behind the terrorism directed toward the West in general and the US in particular. Entire books have been written on Israel's domination of US foreign policy, so when Hillary Clinton promises to raise US-Israeli relations "to the next level" one wonders how that's even possible beyond moving the White House to Tel Aviv.

(Aside: If you have not seen Saturday Night Live's blackballed skit on congressional ass kissing of Israel, it's still available here. It speaks volumes about our "passionate attachment")

In sum, Clinton has given every indication that she is willing to push the country to the brink of nuclear war, whereas Trump, his buffoonery notwithstanding, wants to do business deals. That, in my view, makes him less dangerous than Clinton. So what's a fellow to do? A vote for Jill Stein of the Green Party, I'm told, is a vote for Trump, as it takes a vote away from Hillary. I'm going Green Party. 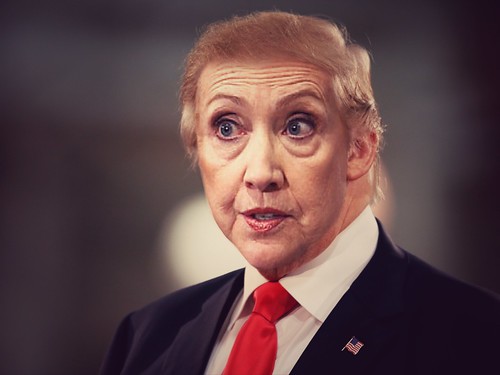 Related Topic(s): Democratic; Embarrassment; Fascist; Fear; Glass-Steagall; Green; Israel; Lesser Evil Lesser Evilism; Policy; Republican; (more...) Terrorism, Add Tags  (less...)
Add to My Group(s)
Go To Commenting
The views expressed herein are the sole responsibility of the author and do not necessarily reflect those of this website or its editors.