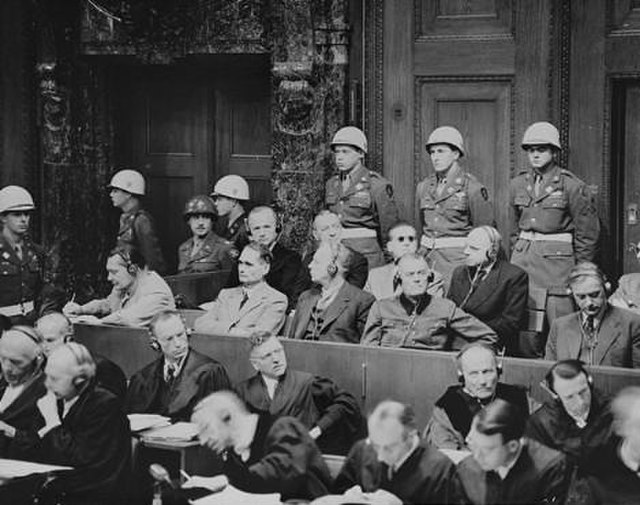 The defendants at Nuremberg Trials
(Image by (Not Known) Wikipedia (commons.wikimedia.org), Author: Author Not Given)   Details   Source   DMCA

Only a couple of weeks ago, US president Donald Trump stated his desire to bring American troops home from Syria: "We'll be coming out of Syria, like, very soon .... Let the other people take care of it now."

As if on cue: An alleged chemical attack in Douma, where the Assad regime's forces are rooting out rebel resistance in their re-taking of the eastern Ghouta region.

Investigators from the Organisation for the Prohibition of Chemical weapons are only now arriving to look into the claim, but Trump (as well as the UK's Theresa May and France's Emmanuel Macron) wasted no time proclaiming the allegations proven and Assad the culprit. On April 14, the three governments launched missile strikes on supposed Syrian chemical facilities.

The strikes were illegal under both US and international law. Congress hasn't declared war on Syria. Congress hasn't even passed an extra-constitutional "Authorization for the Use of Military Force" regarding Syria. Nor has the United Nations authorized military action versus Syria.

The strikes on Syria constitute war of aggression. The Syrian regime has never attacked, nor threatened to attack, any of the three countries which just attacked it, nor are its alleged domestic crimes, however horrible, the bailiwick of those three governments.

And as the Nuremberg Tribunal noted, "To initiate a war of aggression ... is not only an international crime; it is the supreme international crime differing only from other war crimes in that it contains within itself the accumulated evil of the whole."

Donald Trump, Theresa May, and Emmanuel Macron are war criminals.

They're certainly not the first war criminals to hold positions of power in their countries. Every living former US president with the possible -- possible -- exception of Jimmy Carter has a lot to answer for, as do Tony Blair, Nicolas Sarkozy, et al.

Not the first by any means. But there's no good reason why they shouldn't be the last.

In the US, at least, Congress has the power of impeachment, and reason to use it. An increasingly imperial presidency has, since the end of World War Two, eaten away at its constitutionally vested war powers. Congress should finally re-assert its power in that sphere by removing an offending president. In fact, it should have done so long before Trump took office. He just happens to be the current perpetrator.

Beyond impeachment, it's time to reconstitute something like the Nuremberg Tribunal and give it teeth. I personally oppose the death penalty, but if it is a deterrent to retail murder, presumably it would also deter mass murder in the form of wars of aggression.

These people won't stop committing these crimes on their own. They must be stopped. And there's no time like the present.

Related Topic(s): Syria; War Crimes, Add Tags
Add to My Group(s)
Go To Commenting
The views expressed herein are the sole responsibility of the author and do not necessarily reflect those of this website or its editors.