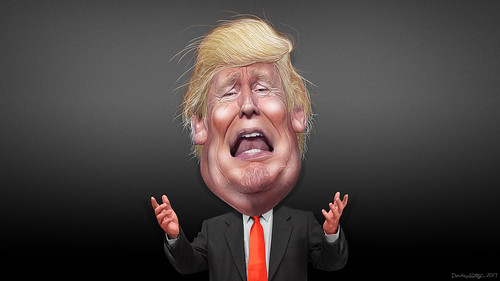 What is the Congress up to with their stupid bill that imposes more sanctions and removes the power of President Trump to rescind the sanctions that President Obama imposed?

The other is to put President Trump in a box. If Trump vetoes this encroachment on presidential power, Congress and the presstitute media will present the veto as absolute proof that Trump is a Russian agent and is protecting Russia with his veto. If Trump does not veto the bill, Trump will have thrown in his hand and accepted that he cannot reduce the dangerous tensions with Russia.

In other words, the bill is a lose-lose for Trump. Yet Republicans are supporting the bill, thus undermining their president.

Yesterday I heard an orchestrated, staged "interview" between two women on NPR's "All Things Considered" (on NPR all things are never considered). It was a propaganda show focused on Trump's expression of disappointment in Jeff Sessions, whom Trump mistakenly appointed Attorney General.

When Trump nominated Sessions, the Democrats and the presstitutes went berserk. Sessions was "unqualified," a "racist," blah-blah. But now Sessions is the hero of the presstitutes and Democrats. They love him, because he has sold out Trump on the question of the justification for an investigation of Trump as a suspect "Russian agent" by an independent prosecutor who happens to be a member of the anti-Trump ruling establishment.

In other words, Sessions, who has been beat up previously by the establishment, is too afraid to do his job.

In other words, Trump had, as I predicted, no idea what he was doing when he chose his government.

So now he suffers for his ignorance.

What was the point of the staged NPR interview between the two women? The point was that Sessions, unlike Trump, respects the rule of law whereas Trump wants to bend the law in order to cover up for himself. The interview was staged so that without the two women having to say it, Trump's anger at Session was proof that Trump was guilty of some illegitimate "Russian connection."

In other words, it was carefully constructed innuendo. Who constructed the innuendo? NPR's women were just reading from a script.

As far as I can tell, there is no one in Trump's government who is loyal to him or who is willing to back Trump's effort to stop provoking the Russians and to cease serving as Israel's military force in the Middle East. As far as I can tell not only the Democratic Party but also the Republican Party supports the left-wing's view that Trump's election was illegitimate, because he was elected by the votes of illegitimate people -- "the deplorables" to use Hillary's term.

Who are "the deplorables?" They are the remnants of the American working class. They are the people whose jobs were sent overseas to Asia by the global US corporations in order to enrich their shareholders and executives via higher profits from lower labor costs. They are the people who in order to stay afloat had to rely on debt in place of the missing income and whose debt is now so high that they have no disposable income. A huge proportion of the American population is incapable of raising a measly $400 without having to sell personal possessions.

In other words, they are refugees from a destroyed American middle class.

Related Topic(s): Deplorables; Presstitutes; Russia And China; Russia And Us Conflict; Sanctions; Trump Cabinet; Trump Foreign Policy, Add Tags
Add to My Group(s)
Go To Commenting
The views expressed herein are the sole responsibility of the author and do not necessarily reflect those of this website or its editors.