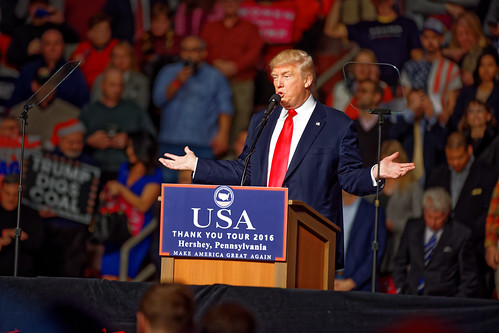 In a small ray of hope, President elect Trump, forced the House Republicans to back down and reverse their secretly made decision to gut the House Ethics Committee.

This is great news, and an embarrassment for the GOP House leadership.

"Following a public outcry, and criticism from President-elect Donald Trump, House Republicans reversed course Tuesday on drastic changes to the independent Office of Congressional Ethics. House Majority Leader Kevin McCarthy (R-Calif.) offered a motion to restore the current OCE rules, and that was accepted by the GOP conference."

With all that Congress has to work on, do they really have to make the weakening of the Independent Ethics Watchdog, as unfair as it at

........may be, their number one act and priority. Focus on tax reform, healthcare and so many other things of far greater importance! #DTS at

While Trump's appointee choices have suggested that Trump has sold out to the GOP, his tweets today, offer a ray of hope that he will not operate in lockstep with the GOP. It offers hope that he may stand up on some occasions.

"It's an awkward way for Republicans to start the new Congress -- and not merely because it gives the appearance that they don't value oversight of their own actions. It also steps on their message of the week, which is one of unity and "hitting the ground running" in a new GOP-controlled Washington."

I am not naive. I realize that there was also a huge outcry from constituents. But this was a good thing. Let's hope this small ray of light signifies reasons for hope, that Trump may have some redeeming qualities. It should be supported. Let Trump know that when he does a good thing, even his opposition supports it.

@robkall Not really - he questioned the TIMING of the act, not the act itself. Don't give this MF any more credit than he deserves. at

Related Topic(s): Ethics; House Of Representatives, Add Tags
Add to My Group(s)
Go To Commenting
The views expressed herein are the sole responsibility of the author and do not necessarily reflect those of this website or its editors.