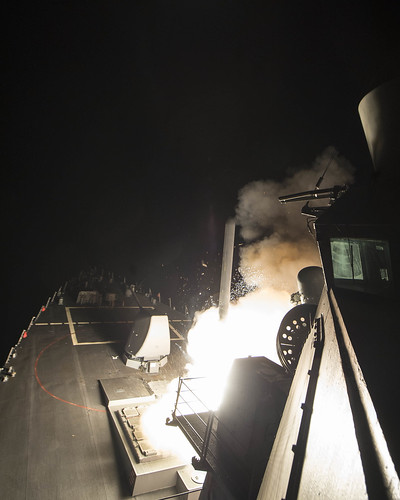 You have to love the twisted system of propaganda and moral hypocrisy that reigns in the United States today.

For almost a year the mainstream corporate media have demonized Russia, Putin, and Donald Trump. Putin was the devil and Trump was his sidekick. They operated some secret cabal that had insidiously infiltrated American consciousness through a few hundred alternative news sites that were part of the Russian propaganda apparatus. They operated in cahoots to steal the election from angelic Hillary. They released documents and emails as part of their ruse. Walking beside them and chuckling as they went, was Bashar al-Assad, the third member of this trinity of diabolical tricksters. Trump was going to sell the country down the river to the evil Russians. He was going to abandon the good fight to overthrow Assad, who had started a "civil war" by attacking innocent Syrians who just wanted freedom and democracy, like in the U.S. He was going to sell out the good neo-Nazi Ukrainians who had risen up on their own initiative to overthrow a despotic Russian-linked government. He was going to build Trump hotels and casinos in Moscow, open a beach resort in Crimea, raking in the dough that he would share with his buddy Putin. They would laugh together as the good old American tradition of foreign aggression was abandoned and Russia annexed the U.S.

In this Obama had been the good guy, the man in the white hat, who had kept the Russians at bay, even if he were not able to defeat them totally in Syria, he had made sure to surround Russia with American military forces. Maybe he should have reacted more forcefully when Assad "used chemical weapons against his own people in 2013," even though Assad hadn't. At least he accused Assad and waged a war. But Obama was a "statesman" and was trying to use American force judiciously. After all, he had won the Nobel Prize for Peace. But he knew Putin was the enemy and never wavered on that. Hillary Clinton would, if she could, follow in his footsteps, but more aggressively. Trump -- he was a Russian appeaser and would abandon the good fight for freedom and democracy.

Then a few weeks ago, when the Trump administration was accused of killing 200-300 innocent civilians in Mosul, Iraq, the same media covered for him. So he killed scores of children; let's move past that accusation since it may be a good sign that the wayward Donald is returning to his senses. The news of the slaughter was buried and forgotten.

Could it be that the prodigal son had returned to his father's house? What a glorious possibility!

Then the perfectly timed chemical "attacks" in Syria earlier this week. The Mosul killings disappeared further, if that were possible. The mainstream media immediately jumped on the latest tragedy: without any evidence, they immediately knew that "Assad has gassed his own people" and was guilty of crimes against humanity. The White Hats -- I mean, the White Helmets -- said so, as did the Syrian Observatory for Human Rights, those impartial stalwarts of objective journalism. Then the good Donald confirmed it. What was happening? Was he turning in his fellow traveler card and abandoning his buddy Putin? What about those Crimean resorts with their golf courses and all the fun to be had there?

No doubt Raytheon, the number three defense contractor, rejoiced upon awakening to hear that the good Donald had launched 59 Tomahawk cruise missiles against a Syrian airfield. That's 94 million up in smoke and the pantry will have to be restocked. Raytheon is probably already hard at work doing that. All the defense contractors will probably be toasting their good fortunes at Happy Hour. The neo-cons should be delighted, as well the many "liberal" demonizers of Russia - e.g. National Public Radio, The New York Times, the Washington Post, etc. - who have waged a no-stop propaganda campaign to push Trump to abandon his best friend Vlad.

The New York Times unashamedly headlined the attack this morning as follows: "The United States fired 59 Tomahawk missiles at an air base in response to the Syrian government's chemical weapons attack this week that killed more than 80 civilians." Who needs evidence for the paper of record? Why even wait for an investigation? Or the Washington Post: "Trump administration retaliates for chemical attack in Syria." National Public Radio chimes in with a totally self-serving interview with Democratic Senator Tim Kaine of Virginia and its usual anti-Russian bias. Kaine has long argued for the U.S. to bomb Syria, but says Trump should have come to Congress for authorization first. He's glad for the bombing, but please, let's follow procedures. That's the Democratic and democratic way of bombing a sovereign country.

Now that Trump has made crystal clear his willingness to risk a much wider war throughout the Middle-East and a more frightening clash with Russia, we can expect a slight easing of the media's characterization of him as the Bad Don.

After all, hasn't the anti-Russian propaganda succeeded in its goal of inflaming the new "cold" war?

Wasn't the Hate Russia campaign always aimed at bringing the "Russian spy," Donald Trump, in from the cold?

Now that he's come over to our side, his foreign policy belligerence should bring him some praise. If not the Good Don, at least he might now be characterized as the Not-Bad Don. After all, he has assumed his traditional role as President.

Related Topic(s): Bashar Al-assad; Bombing; Donald Trump; Propaganda; Syria; Vladimir Putin, Add Tags
Add to My Group(s)
Go To Commenting
The views expressed herein are the sole responsibility of the author and do not necessarily reflect those of this website or its editors.