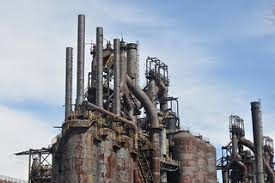 The real target of Trump's trade war is not, primarily, the Chinese, but the U.S.-based corporations that spent the last generation outsourcing manufacturing capacity (jobs) to China.

"The Belt and Road Initiative is tying the planet together, with China at the center."

Under dumbass cracker Donald Trump the United States is accelerating the process of its own decline even more quickly than had the warmongering Hillary Clinton won the White House in 2016. Trump has chosen to wage the worst war possible in terms of preserving what's left of U.S. economic supremacy: a trade war with China. It is a conflict that will inflict huge and permanent losses on U.S.-based corporations and on every nation that attempts to collaborate with Trump's anti-China trade schemes. The longer it lasts, the more the U.S. global trade posture will deteriorate, as China accelerates construction and deal-making on its world-shaking, historically unprecedented Russia-partnered project, the Belt and Road Initiative (BRI).

While Washington continues to militarily encircle China and Russia and Trump flails away at Beijing with tariffs that inflict the most hurt on U.S. businesses and allies, the Belt and Road Initiative is tying the planet together, with China at the center. The U.S. will ultimately be consigned to a shrinking periphery, where its moribund, oligarch-bound, late-stage capitalist economy will fester and groan unless revived by domestic political forces that have not yet been unleashed.

U.S. manufacturing, the very sector that Trump's trade war is supposed to benefit, has slowed in the wake of the president's newest round of tariffs, with companies citing "shrinking export orders as a result of the trade dispute, as well as the challenge of moving supply chains out of China," according to the New York Times. The real target of Trump's trade war is not, primarily, the Chinese, but the U.S.-based corporations that spent the last generation outsourcing manufacturing capacity (jobs) to China and elsewhere in the south and east of the planet. Trump is demanding that these "supply chains" of cheaper-made goods be dismantled on his command as if the U.S. has a "command economy," like China.

"The U.S. will ultimately be consigned to a shrinking periphery, where its moribund, oligarch-bound, late-stage capitalist economy will fester and groan."

Don't try to wait me out, anticipating a new administration in January 2021, Trump warned, predicting that supply chains from China will soon "crumble" and that Beijing will be forced to "deal." Trump addressed his tweet to the Chinese, but the actual targets are the corporations that built the supply chains from what used to be called the "Third World" in order to escape higher wage labor in the U.S. and Europe. The aim of the corporate exodus was to set in motion a global "Race to the Bottom" in which western workers would be forced to compete with low-wage workers of the Global South and East.

The outsourcing of jobs was accompanied by a domestic policy of endless austerity, in which government programs and income supports are drastically reduced so that workers in the corporate home countries are forced to accept any job that is offered. Austerity has been the watchword of Democratic and Republican administrations for more than 30 years, as corporate politicians of both parties sacrificed their working class constituents to a "gig" economy that along with hyper-exploitation of labor in the Global South has fueled the explosion of billionaires.

"The aim of the corporate exodus was to set in motion a global 'Race to the Bottom.'"

Now comes Trump, demanding that those fantastic fortune-making supply lines be dismantled, forthwith. Trump may truly believe he is dealing a crushing blow to China -- who knows what facsimiles of thoughts infest his race-corroded brain? -- but it is far too late. China's economy is already 25 bigger than the U.S., based on purchasing power parity, the favored measuring standard of international economists, and is predicted to become twice as large as the U.S. economy in the next decade.

China no longer needs U.S.-bound supply chains to continue the phenomenal growth that endured through the Great Recession of 2008, when the rest of the world caught "the American disease." And, thanks to the incessant armed aggressions, anti-China and Russia encirclements, and hyper-sanctions policies of Barack Obama and his banshee secretary of state Hillary Clinton, Beijing and Moscow forged an alliance that is the basis of the largest trade and transportation restructuring project since piratical Europeans embarked on their genocidal, colonial rampages half a millennium ago.

The Belt and Road Initiative is well underway, encompassing every inhabited continent on the planet including North America, if that includes the Central American nations of El Salvador, Costa Rica and Panama, which have signed BRI Memorandums of Understanding (MoUs) with China. Jamaica, Cuba and much of the rest of the Caribbean are also eager to be part of the new world trading order. In South America,Venezuela, Guyana, Suriname, Ecuador, Bolivia, Uruguay, and Chile have signed off on BRI. Africa already trades more with China than the U.S., and has found Beijing to be the go-to partner for infrastructure-building. Djibouti, Kenya, Ethiopia, Nigeria and Sudan have signed on. In Europe, Italy, Greece, Luxemburg, Switzerland and, of course, Russia, are BRI countries, and Hungary, run by a hard-right president and soul-mate of Trump, is leaning towards BRI. Except for India and Japan, Asia is virtually all-in. Altogether, the Chinese count 137 nations as at least tentative BRI partners.

As the emerging center of the world economy and the biggest market for automobiles -- where General Motors sells more cars than in the U.S. -- China can literally do without exports to the United States, although it would prefer to trade with everyone. The U.S-based corporations that have over the years become more Chinese than American have been put most at-risk by Trump's bellicosity and tariffs. More fundamentally, U.S. corporations routinely mark foreign leaders for death that interfere with their trade, investment and labor policies. If U.S. corporations become convinced that Trump is determined to pursue policies that will lock them out of the mega-economy that buys more cars, airplanes and agricultural products than any other, they will kill him and ride out the rest of his term with President Mike Pence, who will doubtless be told by God to reverse course.

Related Topic(s): Corporations; Outsourcing; Tariffs; Trump China Trade War; Trump In China, Add Tags
Add to My Group(s)
Go To Commenting
The views expressed herein are the sole responsibility of the author and do not necessarily reflect those of this website or its editors.