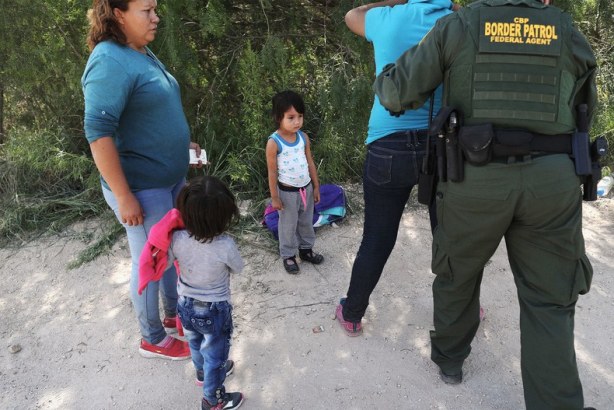 The atrocities the Trump administration is guilty of committing at our Southern border are legion.

Sadly, with impeachment and the daily water torture to which we are daily subjected, the concentration camps in which we are still imprisoning thousands of children have all but vanished from our outrage radar.

But maybe this will restart it.

Some licensed Office of Refugee Resettlement (ORR) psychotherapists are violating migrant children's trust by submitting confidential session notes to Immigration and Customs Enforcement (ICE), which then use the information against the children in immigration court to deny them asylum status and deport them.

"This kind of information sharing was part of a Trump administration strategy that is technically legal but which professional therapy associations say is a profound violation of patient confidentiality. Intimate confessions, early traumas, half-remembered nightmaresall have been turned into prosecutorial weapons, often without the consent of the therapists involved, and always without the consent of the minors themselves, in hearings where the stakes can be life and death."

"We call on ORR to stop this practice immediately and on the Department of Health and Human Services and Congress to investigate its prevalence. We also call on ICE to release any immigrants who have had their asylum requests denied as a result."

Last week, Trump enlisted his Department of Homeland Security (DHS), the division that oversees ICE, against "sanctuary" New York for its refusal to turn immigrants over by preventing New York residents from enrolling in programs to expedite international travel.

According to The New York Times:

"The specially trained officers are being sent to cities including Chicago and New York to boost the enforcement power of local Immigration and Customs Enforcement officers, according to two officials who are familiar with the secret operation. Additional agents are expected to be sent to San Francisco, Los Angeles, Atlanta, Houston, Boston, New Orleans, Detroit and Newark, N.J."

Customs and Border Protection (CBP) spokesperson Lawrence Payne confirmed 100 officers over the next three months will be called up from the Southern border to work with ICE "in order to enhance the integrity of the immigration system, protect public safety, and strengthen our national security."

Among the units being deployed are members the Border Patrol Tactical Unit (BORTAC), the CBP's equivalent of a SWAT team, armed with stun grenades and Special Forces-type training that includes sniper detection.

The same week Trump's Republican Senate enablers let the president off the hook, an ICE agent shot unarmed Brooklyn man Eric Diaz-Cruz in the face during a routine ICE arrestthe very type BORTAC is being tasked to help carry out.

Just in the past year, the Trump administration's war on immigrants has perpetrated the following:

Last January, an Office of Inspector General (OIG) report revealed not only did the U.S. government separate thousands more children from their parents than previously thought; it was separating them before authorities admitted a child separation policy was in place.

Two years ago we learned about refugee children in U.S. custody were being injected with psychotropic drugs.

As many are now reporting, we are slipping rapidly into fascism.

No matter how we look at it, we have become "that country."

We can't pretend we weren't warned.

He and his ardent supporters like to boast about the "promises he has kept."

This should be the daily headline for every major media outlet in the nation.

Sadly, our corporate media would rather we not know about any of this, thus setting up the fait accompli that will one day cause future generations to shake their heads and vow "Never again."

Related Topic(s): Children; Immigrants; Migrant Children; Therapy; Trump, Add Tags
Add to My Group(s)
Go To Commenting
The views expressed herein are the sole responsibility of the author and do not necessarily reflect those of this website or its editors.