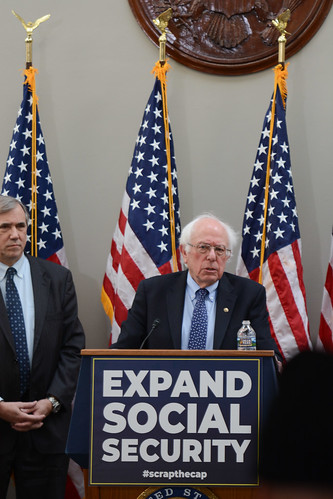 Social Security is back in the news, as both Donald Trump and Michael Bloomberg, two emblematic one-percenter oligarchs, raise the issue of its future as part of their campaign strategy.

Trump (a faux wannabe billionaire) has put Americans on notice that while he may have promised during his 2016 campaign "not to touch" the New Deal's most lasting legacy program, on which some 70 million Americans - the elderly and the disabled as well as dependent children of those dependent upon Social Security rely during his term of office as president, he is ready to start hacking away in a second term. His first target: benefits for the disabled.

Meanwhile, Michael Bloomberg, America's eighth-richest man with $62 billion in assets at last count (minus the third of a billion has just spent so far on an ads-only campaign for the Democratic Party's presidential nomination), is promising to "strengthen" and "improve" Social Security if he becomes the country's first oligarch/president.

But before we get all excited about improved Social Security, let's consider what that could mean. First of all, most of the time when US politicians, like Bloomberg, talk about "strengthening" or "improving" social security, they are actually talking about making it harder to get, by for example raising the full-retirement age for receiving benefits, or adopting a cost-of-living metric that further reduces that adjustment made for inflation each year, so that actual benefits decline gradually over time with no actual numerical cut in the dollar amounts received.

As things stand the CPI measure used for adjusting Social Security benefits for inflation is an index designed to reflect the costs experienced by urban service workers, not the elderly. For the current year benefits were raised 1.6%, a ludicrously low amount by any standard, but wholly unlike the inflation that the elderly, whose major expenses are for food, housing and healthcare, have actually been hit with. (According to the Bureau of Labor Statistics, food prices rose 1.9% in that year, housing costs rose 2.9% and health care costs rose 2%.) Many politicians in Congress, especially Republicans (Bloomberg's party of choice from 2000 until 2018) want to use something called a "chained CPI) which would vastly lower inflation adjustments by substituting a cheaper product whenever one included in the index rises substantially in price, the theory being that low-income consumers will shift to a cheaper product as prices rises for example switching from beef to chicken as meat prices rise, or from a car to a bus if car prices and/or fuel prices rise.)

So beware of those talking of "strengthening" Social Security without reading all the fine print!

But beyond that, let's consider how inadequate Social Security really is as things now stand.

So-called think tank "experts" and politicians, Republican and Democratic, are wont to remind us all the time that Social Security "was never intended to be a primary pension" for Americans""

Related Topic(s): Bernie Sanders 2020; Michael Bloomberg; Social Change; Social Democracy; Social Security; Social Security Funded; Trump Broken Promises, Add Tags
Add to My Group(s)
Go To Commenting
The views expressed herein are the sole responsibility of the author and do not necessarily reflect those of this website or its editors.