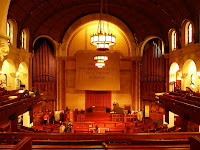 For the past month I have lived at St. Paul & St. Andrew's church (SPSA), one of the churches that OWS uses to house it's members. Recently a large issue has come into play over who is "homeless" and who is not - which seems odd considering that everyone living at the church full-time, truly has nowhere else to go. One guy has a family, but won't stay with them so he is running from something and OWS gives him a place to be. Another guy I know at another church we occupy was essentially homeless before OWS but now, because he has some responsibility, talks as if the homeless are somehow less than he and wants to deny them food and shelter - even if they work for it. Above is a photo of the interior of the church we have lived in for the past month. Lat night we moved into West Park church on W. 86th Street. In some frustration of poor management and even poorer communication amidst the housing group, I penned the following note yesterday to a friend:

"Will be spotty on Internet tonight. Spokes Council meeting at 7:30 at West Park Church. Noted last night at SPSA but no confirmation on new church for tonight. OWS facilitators saying they are not social services and not responsible for homeless. Putting 80-100 people on the line tonight with un-agreed requirements for 'being an occupier' and then leaving decision up to facilitators as to who 'might' get into the new church. Meeting this afternoon with Housing Working Group verging on mutiny. Meeting aborted due to loud arguments, name calling, real internal strife.

And yes. "This is what Democracy looks like". Pushing things to last minute/breaking point is power control device for those in control of information/contacts forcing general populace to vote for rules and amendments they do not agree on in return for shelter and food. Now very divisive with obvious 'anti homeless' bent from leaders. But define homeless? That's what they can't do. OWS succeeded because a standing army of 500 lived in a park - uh, a home. Now park is gone and movement abandons those who made it? That's what's on the table in 1.5 hours. Think I'll attend that meeting. This is defining stuff."

People moved to the new church just fine, but no word on many of the issues from the Housing Working Group that made people upset. That means that I'll be going home to a house divided. Right now, rather than work on the things that brought us to OWS in the first place and are good for the country, it seems we are distracted by simple living details, complicated by unsure management. If you were the opposition to OWS, wouldn't it be best to confuse them at the core of their existence - their home? That's a thought that has been floated as of late. Trojan horses sit right in the square and nobody sees them for what they are.

On a better note, Michael Moore attended Spokes Council last night and sat quietly throughout the meeting. After the meeting he spoke at some length and was pretty inspiring. His main point and basic pep talk was that in just three months, Occupy had made a larger impact on society than any movement before had from racial equality to ending the Vietnam war in the same period of time. That seemed to be much more worth thinking about than all the internal strife that had a house divided for the week prior.

David is a marketing consultant and writer living in New York. He formed Korea's first 100% foreign invested advertising agency in 1997 and spent 16 years in Asia and Europe as an international entrepreneur and writer and has written for Technorati (more...)
Related Topic(s): Homelessness; Occupy Movement; Occupy Wall Street; Occupy Wall Street; Wall Street Greed; Wall Street Protest, Add Tags
Add to My Group(s)
Go To Commenting
The views expressed herein are the sole responsibility of the author and do not necessarily reflect those of this website or its editors.