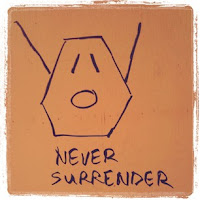 Copyrighted Image? DMCA
Street graffiti by Anonymous
On Friday, April 27th, I was arrested by the NYPD for essentially, being an Occupier. When asked why I was being arrested, officer Kevin Wahlig said, "I don't know, a couple of things. We'll discuss it on the way to the station." Not until much later in the day before my arraignment in court was I aware of the actual charges and I was never read my rights. Stated as (1) Disorderly Conduct and (2) Resisting Arrest, I found the charges interesting in that my conduct was one of sleeping on the sidewalk and my resistance to arrest was premeditated in the officer's mind, well before I was actually arrested. It seemed immediately that preparations for disrupting Occupy's May Day plans were underway.
According to a 2000 court order from the New York State Supreme Court, sleeping is protected as a form of "public expression", so I couldn't possibly being arrested for that, could I? Well, not legally, but if my sleeping was disorderly I suppose I could be cited (funny just thinking about that - "You hogged all the  covers so now you're under arrest!"). (Image by Unknown Owner)   Details   DMCA
But I have an Occupation! by David Everitt-Carlson


The police had come at 6:30am to wake up a host of Occupiers sleeping across the street from HSBC and helping Max in his vigil to highlight the plight of the homeless. I had awaken but fallen back to sleep due to a succession of rainy days and need of sleep. Waking me a second time no less than four officers were in charge of me with Wahlig taking the lead. As I prepared to collect my things and began putting on my shoes I was asked for my ID which I produced and continued packing up. Asking for my ID back was when I was told I was being arrested, so I immediately reached for a cigarette (knowing I wouldn't have one all day) and began to light it - but that set the four officers off in a flurry of trying to grab my hands to handcuff. Arms pulled behind me, entirely too much force was used to detain a 143lb man and the cuffs wrenched so tightly my left wrist was bruised and cut - my body pushed around and manhandled as if they needed to create a scuffle to make it look like something was happening. But nothing was happening except another routine illegal arrest of a member of Occupy Wall Street. 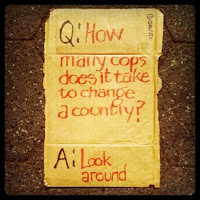 Since the beginning of Occupy on September 17th, 2011 over 17 million dollars have been spent in NYPD overtime, policing a non-violent movement and over 2200 arrests have been made according to the National Lawyers Guild. I wonder how much it costs to arrest a homeless man for sleeping? Whatever the cost, it's too much taxpayer money that could be going to creating jobs and alleviating the homeless problem in the US, but in NYC it seems no amount is too much when it comes to funding the police department. Earlier in the week I overheard an officer say, "I hate Occupy but I love the overtime". Great. That's your tax dollars at work, harassing citizens, suppressing free speech and taking us yet one step closer to a police state - with officers just making up the laws as they go. At Occupy though, we see the NYPD overreaction as a measure of our success. Only if we are truly a threat to the status quo would they react with the brute force and numbers that they have.

My day proceeded with being handcuffed and thrown into a van, not able to take my rolling cart with all my artwork and clothing in it. So I left it with my fellow Occupiers, sure that they would keep an eye on things and I could pick it up later - but that would not be the case either. Once at the station I was relieved of my personal belongings, finger-printed, retnal-scanned and pitched into an empty cell. With no other customers that morning I was doing all I could to keep Precinct 13 alive and buzzing with the smell of a fresh kill. This crime fighting stuff is indeed a serious business. 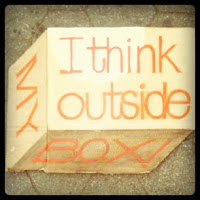 (Image by Unknown Owner)   Details   DMCA
I Think Outside My Box I by David Everitt-Carlson
An hour at the precinct and I was transferred downtown in a van to what is referred to as Central Booking. It's basically a city jail and as opposed to the rules at the precinct where I was required to remove my belt so I didn't hang myself from the shame of my charges, I kept my belt, wallet and ID and was put in a large cell with 10 or so other prisoners - and if one had to judge the state of criminal activity by this lot, it might be assumed that we were all living on Sesame Street. One guy was in for "moving cardboard" in an attempt to arrange a warm sleeping spot for himself. Another for DWI, of which he seemed totally capable, and yet another for short paying a cabbie claiming the guy ripped him off by driving a longer route. No axe murderers, armed robbers or drug dealers. Unless prisoners are arranged by the severity of their crimes it seemed this early morning crew of primarily black and hispanic customers were doing nothing but giving the cops a way to keep their operations budget and make the monthly arrest quota with just days to spare. 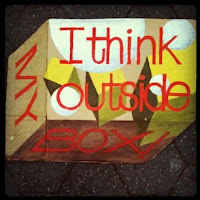 (Image by Unknown Owner)   Details   DMCA
I Think Outside My Box II by David Everitt-Carlson
Hours passed and we were served dry bread with a piece of cheese on it for lunch at noon. Hours more passed and we were served another two pieces of dry bread with cheese on it for dinner at six - and by this time, very few people had been processed through to arraignment. So we were basically sitting around with our thumbs up our butts comparing charges - all misdemeanors. Finally, a number of us were moved to another cell to be able to speak with our respective attorneys. We were transferred by chain gang, all handcuffed together and began, one by one, to have short meetings with our public defenders. Outside we could hear both the police statements of events and the accused accounts. During the DWI guy's meeting we could hear the attorney speaking on the phone with the guy's wife who was downstairs posting bail for her husband. "She wants to know if there's a bar in the building", the attorney said, "While she waits for you to get out". Funny, this 'he and she' separated by phone and crossbars, seemed the perfect couple for the times. 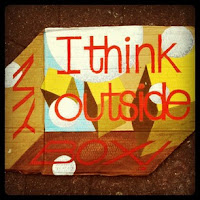 (Image by Unknown Owner)   Details   DMCA
I Think Outside My Box III by David Everitt-Carlson
My attorney had been arranged by the National Lawyer's Guild and came prepared to hear the trumped up charges. Representing the Legal Aid Society who had been retained by NLG to handle an overflow of cases (Of the over 2200 arrests made of Occupiers, nearly 700 from the Brooklyn bridge march back in October are now finally going to trial) currently going through the system, he recommends that we fight the charges instead of taking a plea bargain that would drop them after six months if I remained out of trouble. Now knowing the police can just make up charges whenever they want, I didn't feel confident that I could keep out of jail until then, and with any other arrests, even bullshit ones, I would be looking possibly guilty on the standing charge - and so I agree with my council and decide to fight. It's a no-brainer since we're now seven months into  the battle anyway. Methinks it's time to start winning. 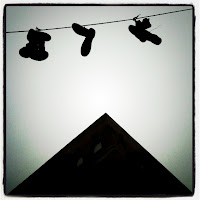 Arraigned and out before 9pm, I make my way back to Union Square only to find that the police had harassed and raided the Occupy tables there and confiscated my rolling cart with the rest of my clothing and all of my street art business (Signs illustrated in photos here). Eye witness reports of Officer Lombardo from the 7th precinct rolling away my cart are plentiful and I have photography and video of the heist. Now I was not only homeless, but jobless by nature of harassment and theft by the NYPD. It seems once one is down, the procedure is to keep them there and I can assure you, the police are doing their best to oppress the less well-armed. Today I was asked if I ever thought I would get the bag back. "I don't know", I responded. But I can guarantee you, once I get back in the business of making those clever protest signs, I have a whole new target to aim fun at.

It's time the NYPD is outed and rightfully disrespected for the childish and boorish organization they have become - arresting the developments of a society that has had quite enough of the rich getting richer while the poor become continually poorer. I have not yet begun to fight.